In this paper, we argue that democracy is meant to be not the consensus on «government», or on public choices, but a broadly unanimous or very largely majority sharing of a set of rules that, in the Italian case, are expressed in the Constitution of the Republic. Among other things, two implications derive from such an assumption: the real start in Italy does not lie in the formation of the Savoy Kingdom but in the approval of our Constitution; federalism has to be defined within constitutional rules, among which the art. 3 (de facto equality of all citizens) and the art. 53 (progressivity principle for tax system) are pre-eminent. These articles fix the distribution rules - the most important in our Country. As regards the formation of the Kingdom and the origins of the Southern question, in the author's opinion the fiscal choices made in the first years after Country's unification are very important. These choices favour consumption taxes, chiefly levied through local authorities, which are burdened by a lot of improper costs. In this respect, the Ricardo's model is suggested: taxes decrease employment, increase gross wages, trigger a huge migration from Southern territories. All this has caused, from the start, an obstacle to the development of Southern economy that cannot be overcome. 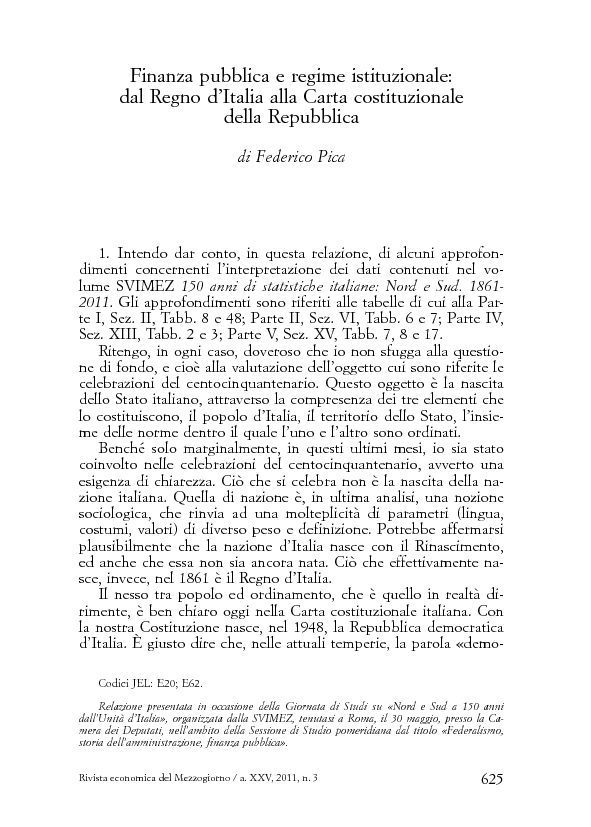