During a not so short phase, between the end of the last century and the beginning of the new one, with the prevalence of the revisionist guidelines resulting from a subjective analysis of the South, the Southern question has been relegated to a residual position, up to deny its existence and to propose the repeal of the concept of Mezzogiorno. Only in recent years, the question of southern territories has once again begun to be considered as an «open question» at the national level and the debate started with the birth of the new South has been taken up. In the pioneering postwar period, the establishment of SVIMEZ and the commitment to transform the less developed area of the country gave substance to a set of reforms of great importance, whose significance must be assessed today. On this basis, a review was made of the beginning of the path of thought that has replaced the classic Southernism. The «practical theory» of the new Southernism, built thanks to the experience of IRI leadership and to initiatives such as the CEIM, focused on the strategic idea of industrial development and modernization of Mezzogiorno. This new elaboration had its roots in the general topic of depressed (or underdeveloped) areas and related theories, spread in the second postwar at the international level. The comparison between the main elements relating to the origin of the new Southernism and the current situation in the Mezzogiorno, with the obvious need for an updated and deep effort to increase innovation and competitiveness levels, is a prerequisite for identifying the resources needed to bridge the gap and the full economic unification of the country, a hundred and fifty years since its political unification. 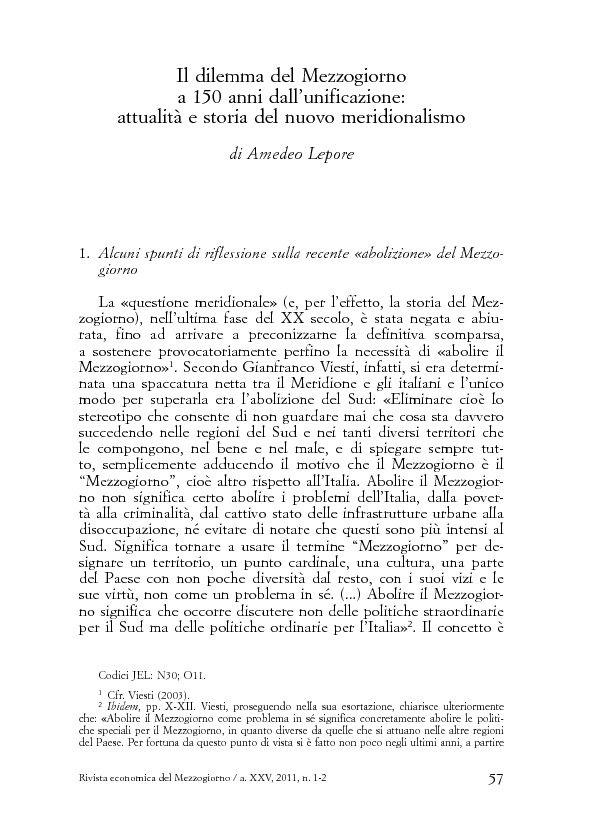