Given the increasing share of the EU budget devoted to Cohesion policy, several studies have tried to identify the contribution of such a policy to regional economic growth. This paper aims at establishing which policies have the greatest effect on regional development. Since Cohesion policy is organized into several fields of intervention, it is interesting to analyze the dependence relation between regional growth and the expenditure for the implementation of Cohesion policy, assuming that certified expenditure in various fields of intervention sufficiently approximates policies' implementation in different sectors. Identifying policies with their respective implantation expenditure could represent a limit for this analytical approach because growth potential in various sectors may be different among Regions. On the other hand, among all possible measurements, certified expenditure represents the interventions more objectively. Consequently, through the verification of coherence between fixed goals and tools used for regional development, the aim of this paper is to establish the effectiveness of the policy-mix set for Cohesion Policy implementation. The empirical analysis refers to a convergence model that - besides linking growth and identified growing factors starting levels - includes, among independent variables, Cohesion policy expenditure for the several fields of intervention, as they are named in the institutional Eurojargon. Thanks to the support of the Italian Ministry for Economic Development and the Directorate General for Regional Policy (DG Regio), this analysis avails itself of a very detailed database, relating to the period 1995-2006. Results confirm the effectiveness of the policies carried out for the growth and the catching-up of EU-15 lagging Regions, showing a robust relation between per capita growth rate and expenditure for the most stimulated policies, such as basic infrastructures for Obj. 1 Regions and labour market policies for non-Obj. 1 Regions. Finally, it is interesting to dispose of a growth measure in response to the expenditure for policy implementation. 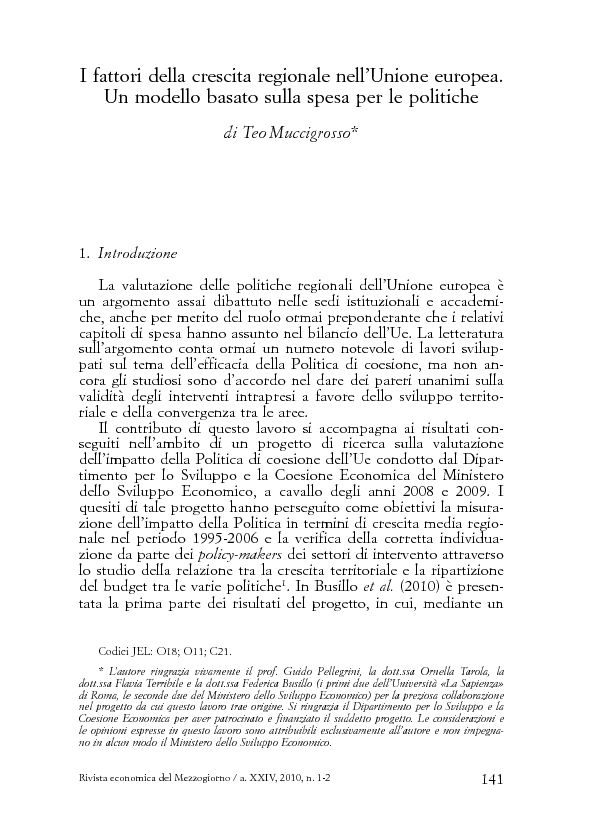