An increase in wage differentials between the North and the South of Italy is often considered as essential for reducing development gap. Economic reasoning leads to affirm that wages (for a "sound" growth) have to correspond to labour productivity, which is lower in the South of Italy. Moreover, it is requested to put a ceiling to the wages of the South, according to its lower living costs compared to the North, on the basis of an equity explanation. These two matters would lead to argue that, according to equity reasons and aiming at an appropriate development of the South and the North of Italy, wage differentials are needed between North and South, corresponding to productivity differentials (taken into account the purchasing power parity). Then, it should be specified which ones would be the "correct" differentials. Although the differential wage thesis is acceptable from a purely economic point of view, the equity approach is less sustainable (and acceptable). This is particularly true in the Mezzogiorno, where, in spite of lower living costs, structural disadvantages has to be faced, affecting negatively the life quality of residents (scarcity and low quality of services, lack of infrastructures, etc.). Furthermore, such an economic approach should be carefully considered, since in most towns of the South the living costs - especially for some services - is in average equal to that registered in towns and areas of the North. On the basis of recent available empirical evidences, in this paper it is argued that, not considering composition effects, wage differentials between North and South are remarkable, and are much larger than productivity differentials. 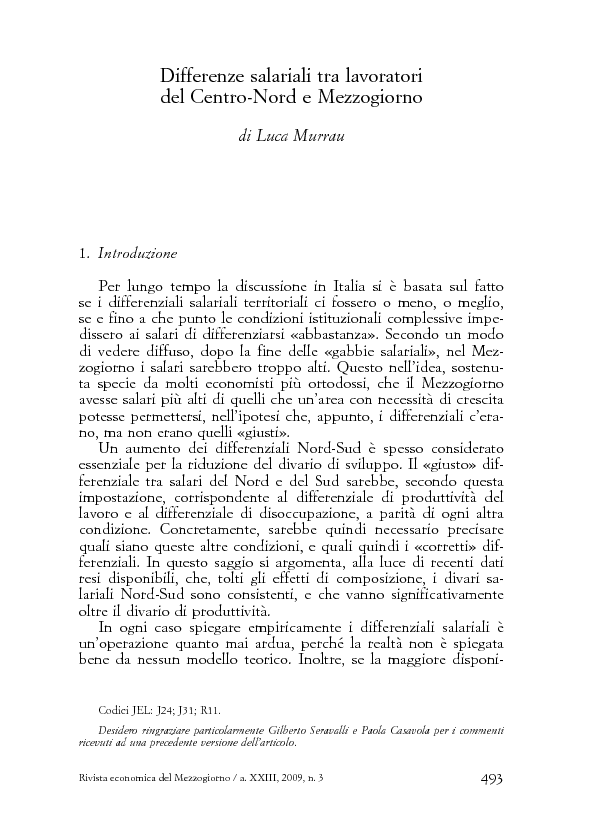