This paper aims at identifying individual and family features that represent advantage or disadvantage factors in the participation of young people to labour market. In particular, the difficult condition of the Southern Italy is analysed. First, we will compare the participation of young people to labour market in Italy to the one of the main European countries. The European Union and its main countries represent a natural benchmark for the conditions of labour market in our country. Subsequently, we will analyse the gap between young people and adults, in different territorial partitions, taking the most important indicators of market labour into consideration. Participation levels and the probability of finding a job vary according to gender, education level, place of residence and economic and cultural support given by the family. In the third paragraph, we will take the family context of Southern young people into consideration. There are some cultural factors acting at a deeper level on the success of young people in labour market. The fourth paragraph describes individual and family features of non-studying and non-working young people. Inactive young people live mostly in the Southern Italy (67 per cent). More particularly, they are young women, almost 42% of all the 15-29 year old inactive population. Finally, we will explain the results of the implementation of a multinomial logistic regression model measuring the influence of some structural variables on the probability that jobseekers, both in the Southern and in the Centre-North Italy, have started a job after one year. 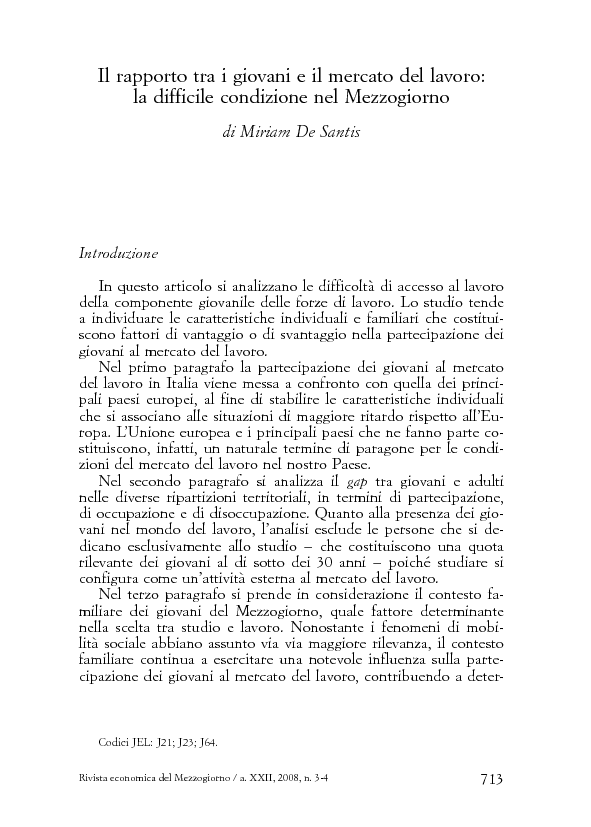