The aim of this paper is to verify if Southern enterprises achieve different performances in cases where they are established in areas characterized by small enterprises or outside such areas. For this purpose, we make use of a partition of the Southern territory into local labour systems, in which we identify three large groups: the first, in which systems of small enterprises prevail; the second, in which large enterprises settlements prevail, and the third, which shows a low industrialization rate. Data on enterprises have been retrieved from Capitalia three-yearly surveys. In this case, three surveys covering the period from 1995 to 2005 have been used. Southern enterprises have been aggregated into three groups according to the location of their factory in one of the groups previously mentioned. Their performance between 1996 and 2003 has then been analysed, using some indicators such as ROE and ROI. This paper points out that enterprises localized in low industrialization areas show ROI values significantly higher than those of the enterprises localized in other areas only in the first years of the period considered. In the period 2000-2003 differences disappear in almost all sectors considered; finally, in 2003, a better performance for enterprises located in systems in which large enterprise prevails emerges. Furthermore, it appears that made in Italy-exporting enterprises do not show performances significantly higher than those of non exporting enterprises. These last two aggregates show progressively similar results, if we consider 2000 and 2003. 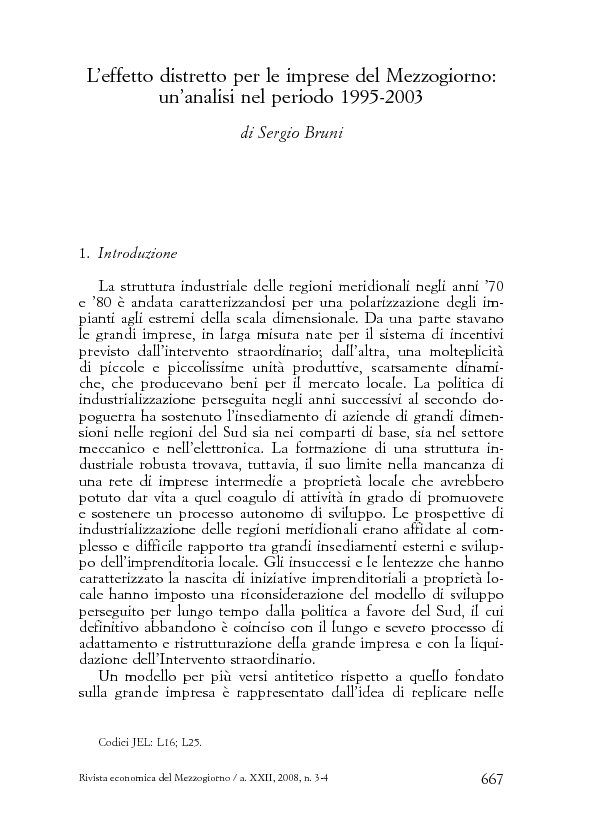