In this paper we provide new estimates of the real and financial wealth of Italian households Region by Region from 1998 through 2005, following the methodology of Cannari et al. (2006) who used regional series to break down the national figures in order to obtain territorial data. With respect to the earlier literature, we have introduced several methodological improvements. First, our estimates are more comprehensive: new components of real and financial wealth are now estimated and included in overall wealth. Second, our estimates are more accurate: for example, our calculations are based on a new series of house prices recently made available. Our estimates confirm the highly uneven territorial distribution of per-capita wealth of previous analyses. In 2005, the percapita net wealth of Italian households amounted to euro 133,500; in the Southern Regions it was euro 83,000, less than 50 per cent of the euro 167,900 of the Northern Regions; in the Central Regions it was approximately 87 per cent (euro 145,400). The richest Regions turn out to be Liguria, Emilia Romagna and Valle d'Aosta; the poorest ones, Puglia, Sicily and Calabria. 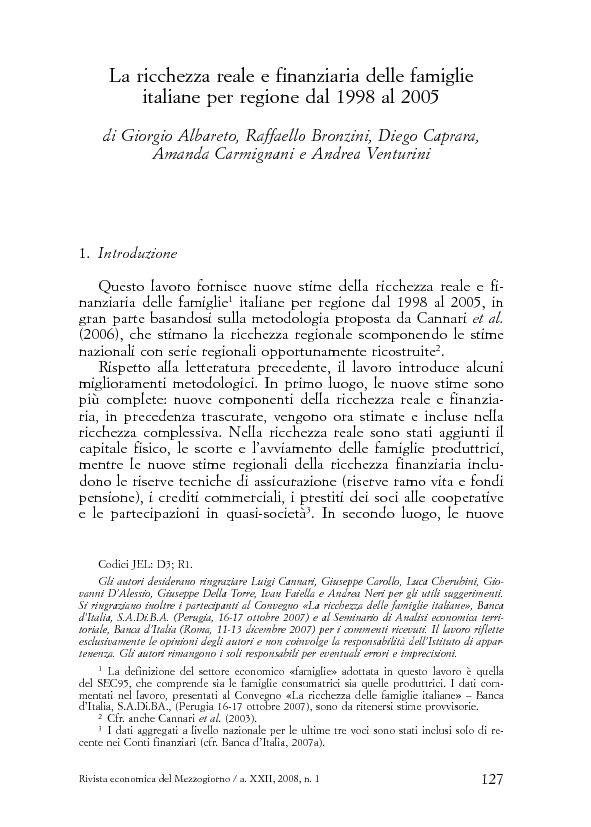