The introducing of the government bill about the enforcement of the constitutional section 119 (fiscal federalism) seems to be imminent. In the nearly prevalent formulation it's asserted federalism represents wide self-government of the local authorities, causing higher gaps between poor communities and richer ones. Beyond sophism included in this assertion, there is the problem of the strict enforcement of the the constitutional rules in force, that establishes two evident principles: to assure every local authority that pecuniary resources which law has assigned to it (taxes and own revenues; revenue sharings; equalization fund, if it's due) are enough for its financial requirement; the financial equalization meaning that, given an equal tax burden for every citizen, the local authority finances fully similar public utilities. In the nearly prevalent formulation and in the texts that it has been possible know are evident violations of constitutional rules: not only the financial equalization is not assured by no means, in the above mentioned sense; not only the additional caracteristic of resources to assign on the basis of paragraph 5 of the constitutional section 119 is not considered, but it also happens that the normative system isn't referred anything but the backing of financial requirements of essential levels of public utilities (if can be obtained), which causes the violation of the principle contained in paragraph 3 of the constitutional section 119, which prohibits the bond of destination of financial resources assigned to local authorities. 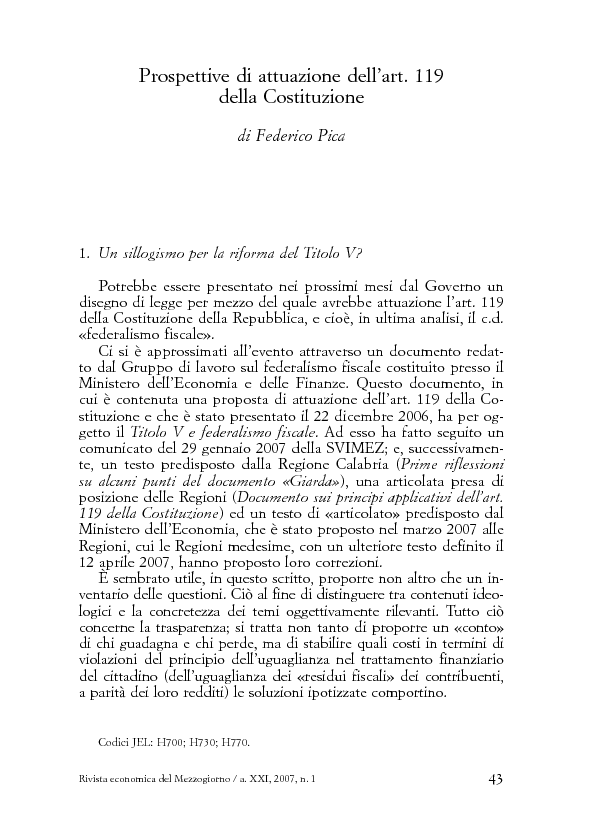