The aim of the paper is to show the main results obtained by reconstructing over the period 1880-1992 omogeneus disposable income time series of consuming households, region by region. The study has been carried out using a new SVIMEZ database elaborated in accordance with the new System of National and Regional Accounts (SEC95). The analysis confirms the substantial delay in the economic development of Southern Italy, due to inadequate skills in creating goods and services (measured by GDP) and to a even lower households' wealth endowment (disposable income). Nevertheless, in recent years from 1980 to 2003, these two indicators show different dynamics occurring a substantial recovery of households' income in the South; while at the beginning the gap between Southern Italy and the rest of the country was, in terms of disposable income, equivalent to 49,5 points - 8 points exceeding the one measured in GDP per inhabitant terms - in 2003 it was equivalent to about 36 points, thus showing about a 13 points reduction. This differential is lower to that one observed on the basis of per capita GDP. However, this about 36 points gap gives a realistic picture of the disunity between the two Italian areas (Centre-North vs. South) and, at the same time, it highlights that a significant structural growth has to be achieved in order to realize a real, not only economic, unification of Italy. 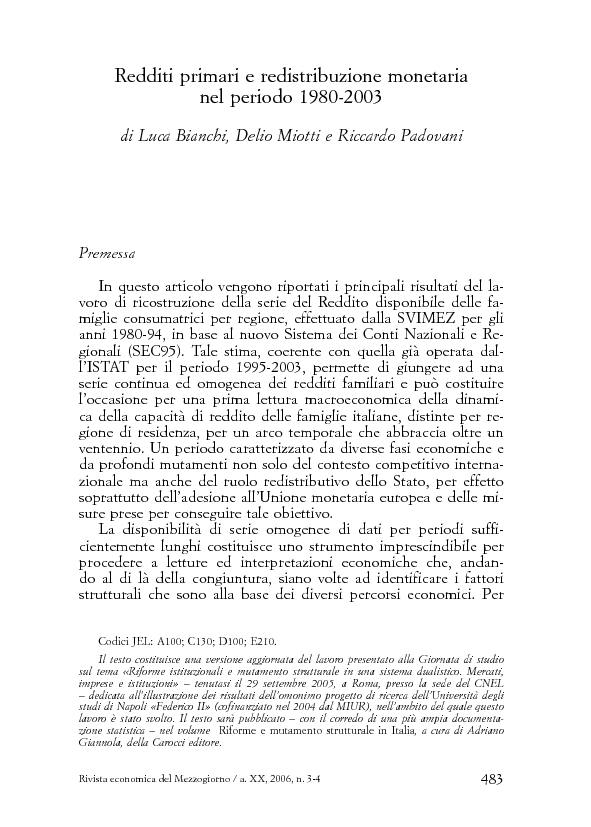