Italian structural difficulties concerning the secular "dualism" between North and South areas, and the related deep "gap", can best refer only using an adequate territorial scale; for a persuaded "meridioanlist", as the author is, the proper scale cannot be the whole Southern Italy, considered as a geographic and economic unity. The full meaning is that Italian structural difficulties are not only "macro" problems; therefore, the responsibility and the autonomy of politicians or decision-making subjects, especially in some measure "micro", have to be strongly involved in the process of assessment, reflection and realization. The logic of cohesion and of an "as well economic national unification" should exhort to review the way to deal with these problems, and with the parameters used to measure the imbalances and to judge and appreciate the progresses of the "weak" macro-area with reference to those of "strong" macro-area. SVIMEZ is for some time in a strong objection of EU development regional policies, which considers eligible only NUTS2 areas, which have a per capita GDP inferior to 75% of Community average, and thus worthy of interventions and structural support. The valuation on territory conditions is not to be submitted to indicators relating to the "quantity" of disposable goods and services, but to the comparison which involves the "quality" of utilities and services returned de facto by those goods and endowments (for instance "infrastructural") to the area. 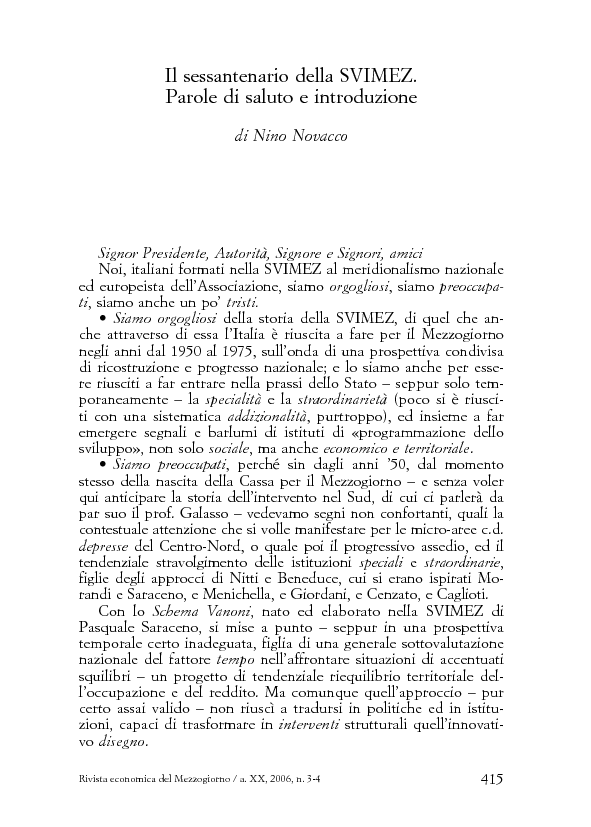