The problems of currency policy and international trade were central to the economic policy agenda of the first Reconstruction governments. In March 1946, in a complex economic context marked by the increase in the State budget deficit and the expansion of commercial credit (aimed at encouraging the recovery of economic activity but with foreseeable inflationary effects), the first De Gasperi-led government decreed the introduction of the «multiple exchange rate» regime and the «franc currency» system – measures in favor of entrepreneurs operating in foreign trade. The adoption of this flexible currency policy, which caused not a few perplexities on the part of the international monetary authorities, worried by the triggering of currency dumping to the advantage of individual operators (or even pure speculators), proved insufficient to realign internal prices to international ones and to promote consistent export flows. With a subsequent decree, passed in April, a further reform was introduced, which granted exporters the possibility of using 50% of the currency obtained from exports not only for purchasing essential raw materials, but also for negotiating the same currencies at market prices with banks authorized to trade foreign exchange. This way, alongside the system of «multiple exchange rates», an anomalous «parallel market» of currencies was also inaugurated. The analysis of the literature and the research of the material kept in the archives of the Bank of Italy, the Ministry of Foreign Affairs and the Central State Archives represent a solid documentary basis through which to carry out a scientifically based study on a complex post-war story 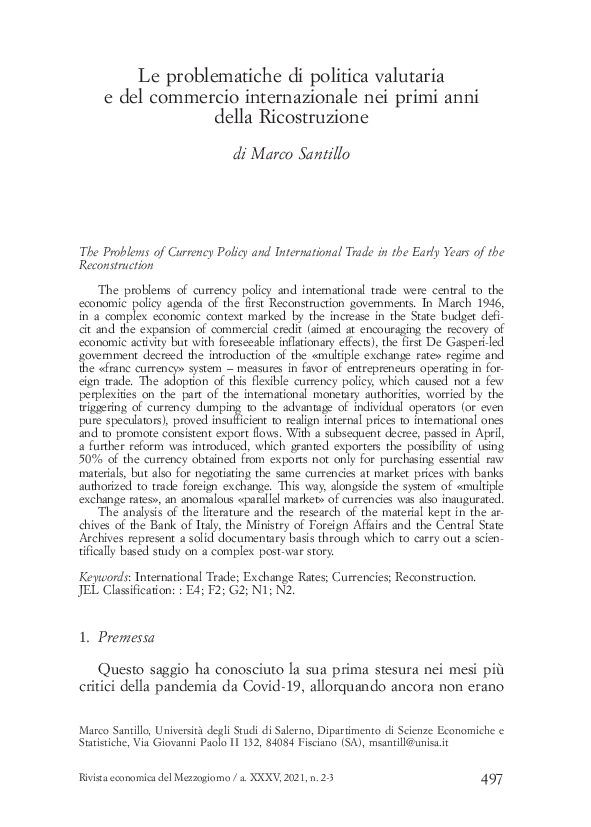