The aim of this paper is to study the position of women in the labour market over the years 2013-2018, since the disparity compared to men is still a very present phenomenon in Europe. In order to obtain a more complete overview of woman well-being in the Italian and Abruzzo labour market, the analysis focuses on the study of data on female employment in Italy and Abruzzo and BES (Equitable and Sustainable Well-Being) indicators, also at provincial and regional level. The main source used is the ISTAT database (i.stat) at the macro level which provides official estimates of the employed and jobseekers based on the ISTAT Labour Force Survey and the resident population by age, sex and marital status according to the Permanent Population Census. These data are integrated with the Almalaurea database on graduates of the partner universities. An in-depth focus is dedicated to segregation as the unbalanced distribution of female employment between sectors and professions with the construction of statistical indicators. With the availability of data at the macro level, aggregated by sex, by age and not by individual, and with a purely descriptive and univariate analysis of the phenomenon and available data, we have briefly outlined the position of women in the labour market, in Italy and in Abruzzo, over the years 2013-2018. 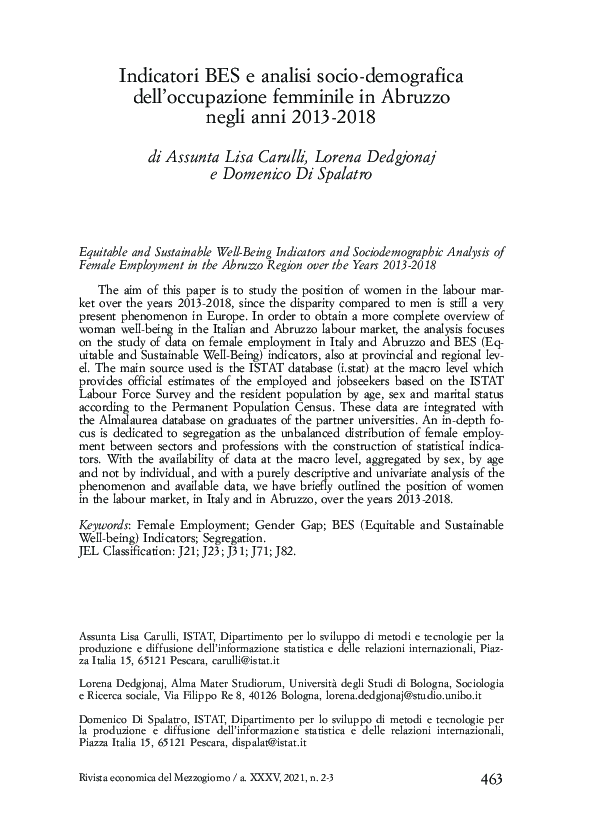