The first twelve years of intervention by the Cassa per il Mezzogiorno, when the phase of direct action was developed, was mainly committed to the financing of works concerning the territorial and productive restructuring of the rural areas of the South of Italy. At the end of this phase, the agricultural productivity rate of the South increased by 2.8% compared to the previous period, thanks to the reclamation of large areas of this macro-region and the increase in civil and road infrastructure, with the construction of water mains, sewers and vehicular networks, which experienced a significant development, with thousands of km paved with new bitumen. This period of extraordinary intervention, defined as pre-industrialization, was fundamental to create the preconditions for the catching up of the South; however, some underlying problems remained unsolved. The prime example concerns the «economic distance», within the same southern territory, between inland areas and coastal and urban areas, which can be defined as the «first double gap» in the context of the relationship between the southern question and the agrarian question. Despite the expansion phase of the Golden Age and the huge financial and human resources put in place throughout the period of the extraordinary intervention, in fact, the problem of the «first double gap» has shown a very strong degree of resistance, even with respect to the new paradigms of the age of globalization. 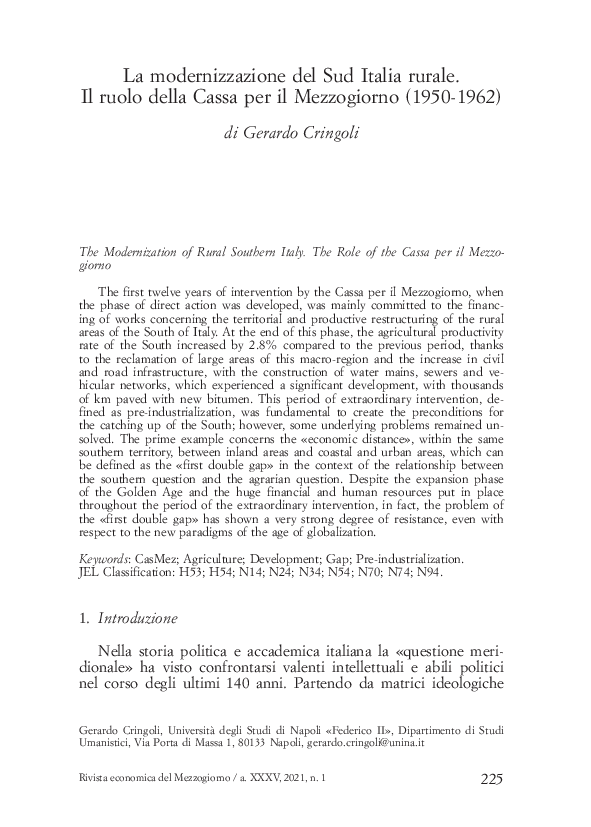