The widespread of technology and the advent of Web 2.0 have deeply affected the tools used in social research. New possibilities have opened up leading both to adapt the existing methodologies to the new medium, the Internet, and to create new ones. According to the literature (Jones, 1999; Mann, 2000; Coombes, 2001; Chen and Hall, 2003; Hewson et al., 2003; Di Fraia, 2004; Rondanini and Rech, 2006; Fielding et al., 2008), there are many advantages (Lee, 2000; Madge and O'Connor, 2004) in using online research methods. Firstly, the possibility of reaching individuals scattered in very wide geographical areas; secondly, the possibility of contacting people with mobility issues or coming from marginalized social context; moreover, the possibility of addressing sensitive issues thanks to the anonymity of both interviewers and interviewees; and, obviously, the reduction of costs. There are some noticeable disadvantages too (Fricker and Schonlau, 2002; Wilson and Laskey, 2003), first of all the difficulty to reach people who are not connected to the web, and obviously the impossibility to control with whom the researcher interacts during the project. The aim of the paper is to contribute to the debate on the impact of Ict on social research discussing actual research experiences realized using different methodologies such as the netnographic approach (Kozinets, 2002), the online focus group (Reid and Reid, 2005), and the mobile video ethnography (Spinney, 2011; Mortara and Sinisi, 2016). 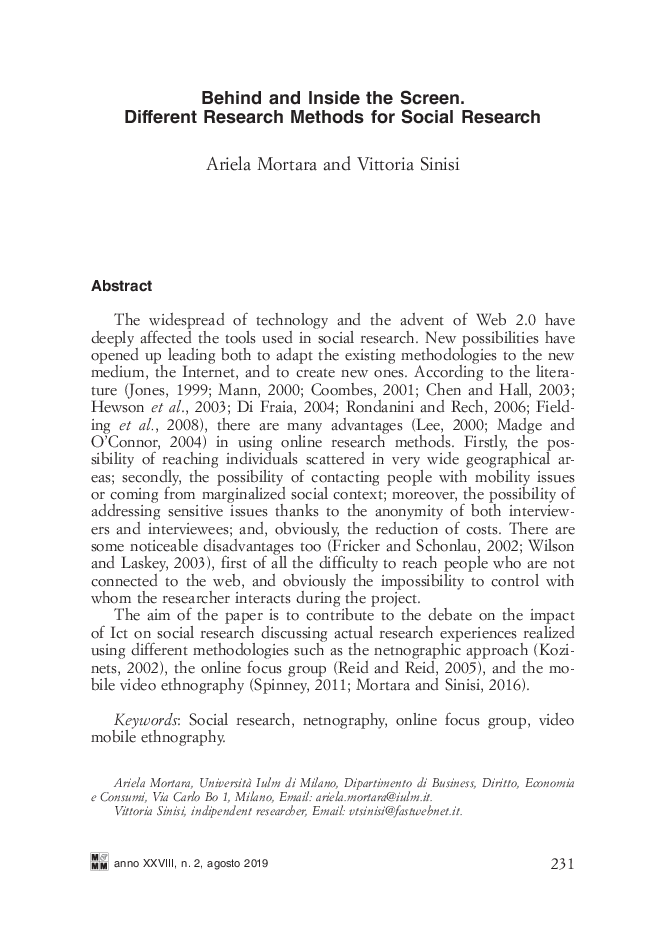