The brand «Paniere (or, Hamper) of typical products from the Province of Turin» is an umbrella brand created by the Province of Turin with the intent to make the most of some agrifood productions that can be relevant for the local economy and that have a documented history or a proven tie with the territory. The «Paniere» project was born in 2000 and in the past years it developed several actions aiming to increase the quality of the selected products and their subsequent valorization from the point of view of business and information to the consumer. During the last few years, the improvement of the product by now consolidated, the main actions of valorization have concentrated on the presence in fairs and markets and in the sales points of Eataly. The analysis was conducted on nine products considered as particularly meaningful for their productive dimension or for the specific characteristics of the product itself. The main producers were interviewed and asked to estimate the results of the project in terms of increase of the turnover, of its visibility and the awareness both of the brand and the product. Moreover they were asked to give an appraisal on the operations and the activities put in place by the Province. From the data collected it appears evident that the combined job of the Province and the several associations involved has brought to scattered results. In particular it is evident that no meaningful results have turned out whereas a partnership between the different companies and the consortium or the association that manages the brand of the product has not been formed, while on the contrary the results are worthy of note whereas the logics of the collective job have been accepted. Beyond the specific differences of every single product the work on the brand of the «Paniere» has brought an increase in awareness that is confirmed also by the analysis carried out among the consumers. The brand is known within the Province of Turin thanks to the presence in the sales points of Eataly and also to the presence in the main local and international enogastronomic events that are carried out on the territory. On the contrary, outside the Province of Turin the awareness of the «Paniere» brand decreases, according to consumers assertions, but the producers point out that they had all the same an increase of their own market also outside the local market. 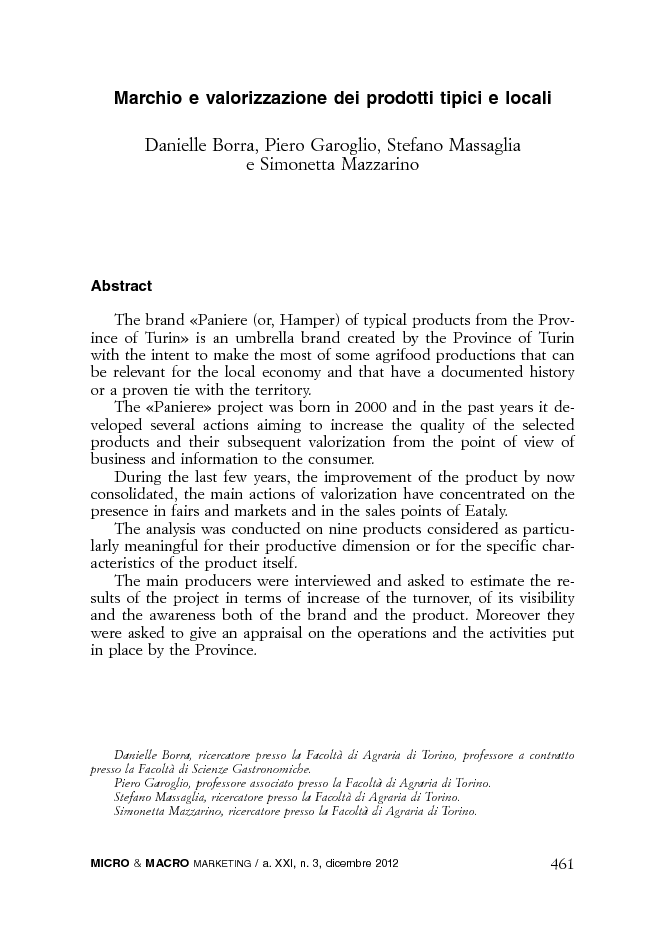