Making use of an original data set we investigate the employment dynamics of a panel of Italian manufacturing firms over 2002-2010, and check whether, during the onset of the financial crisis (2008-2009), foreign multinational firms (FM) operating in Italy show a different employment adjustment with respect to domestic multinationals (DM) and to non multinational firms (NM). This paper is the first to test this issue for Italy and follows the benchmarking literature on other countries. We carry out an extensive descriptive analysis relative to firm characteristics and to employment growth over the period disaggregated by the three firms types, also taking into account subsamples of firms with different size and geographical location. We also estimate a GMM System dynamic panel model allowing the global crisis to impact differently on firms employment. A strong evidence of heterogeneity in terms of productivity, wages and financial indicators and of regional location is observed across the three firm types. Besides, the crisis did affect employment in firms according to their multinational status while also hitting firms differently according to other characteristics such as size, location and sectors. By looking at the descriptive analysis, over the crisis, employment changes were negative for the overall sample (-0.50) but increasing in dm and in fm (2.05 per cent). However, the econometric findings, which control at the same time for several factors affecting employment (firm ownership but also other firm and industry variables in addition to regional location), show a different picture: foreign multinationals are systematically more likely to experiment employment growth reductions than domestic multinationals and national enterprises in the North Centre area of the country thus contributing to the employment contraction during the crisis. Our results are not consistent with the idea that foreign investment are less affected by an economic crisis and that they may act as stabilisers in an economy. 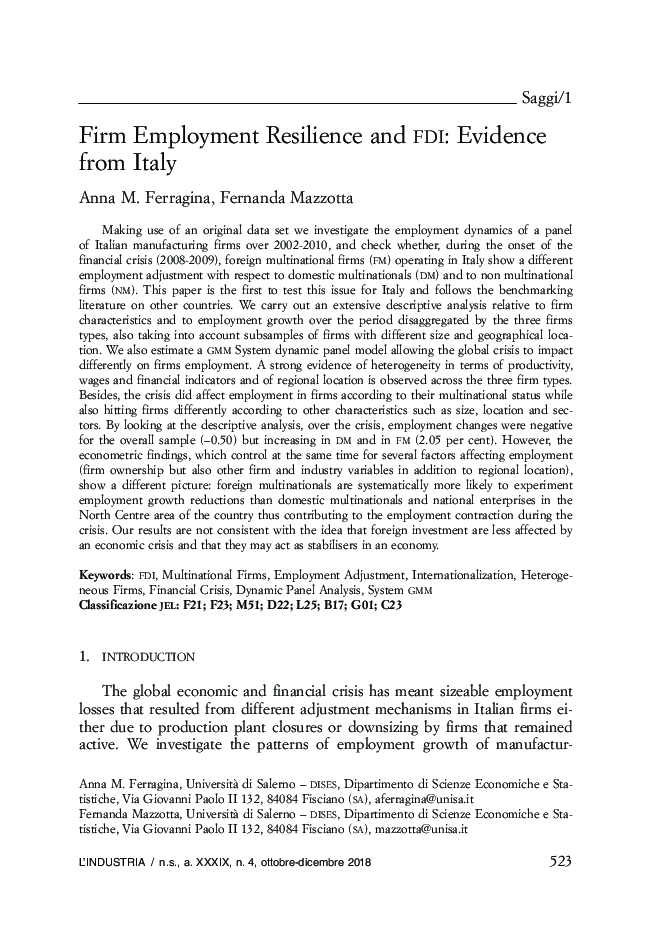