The so called New Economy, in association with the growth in the relative importance of Information and Communication Technologies (ICT), is often seen as the main engine of the productivity growth rates acceleration in the second half of the Nineties in many advanced economies and especially in the United States. The ICT diffusion may bring about important changes in firms' organizational structures, affect the competition between firms and pricing policies and impact on the characteristics of the labor market. One of the most interesting and innovative features of the New Economy is perhaps the E-commerce phenomenon, even though it is admittedly more a potential than a real phenomenon. In this paper, I focus on E-commerce trying to isolate, mainly from a qualitative point of view, the major channels through which its diffusion can have an impact on employment, both directly or indirectly. In particular, I emphasize the dis-intermediation and re-intermediation processes associated to the diffusion of E-commerce, the relative importance of which may decide the final impact of E-commerce on employment. I detect a number of micro- and macro-economic conditions potentially affecting the diffusion of E-commerce and investigate the labor saving nature of the technologies on which it is based. I assess the impact of E-commerce on firms' competition mechanisms in existing markets and ask whether its diffusion might generate markets for new goods and services. Moreover, I study the main characteristics of "electronic" markets and compare them with those of traditional markets estimating the degree of substitutability versus complementarity between traditional and on line markets. Finally, I focus on some of the industries in which the impact of E-commerce is supposedly bigger and discuss in greater details the sign of E-commerce impact on employment for each of them. 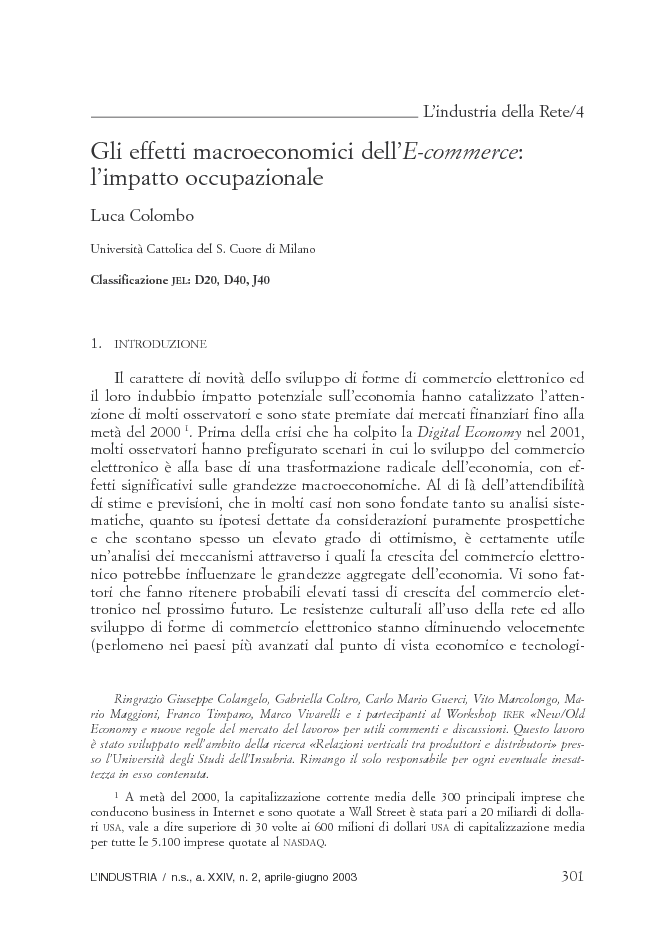