The debate over the inefficiencies and risks of selective industrial policies has influenced the agenda of policy actions in many ways and for a long time. It surely has influenced the way governments describe their policy interventions. «Horizontal policies», «enabling technologies», «getting the fundamentals right» are all terms inherited from that debate. Yet, in many cases such debate goes hand in hand with policy practices, around the world, that are de facto selective. China's experience of industrial growth is noteworthy for several reasons, not least because it has made a massive use of selective industrial policies. The industrial development guidelines set by the Five-Year Plans are extensively based on the choice of «strategic» or «pillar » industries to be promoted and supported. What remains unclear is the way in which such industries are identified among many. With this paper we want to stimulate a debate on how to improve the government choice of strategic sectors. In the specific case of China, we argue that improving the transparency and the rigour of such choice can be crucial for the national and the local governments to maintain an authoritative position in the transition to a «market» economy. Firstly, we reconstruct the evolution of the strategic sectors identified by the Five Year Plans from the midnineties to the present, highlighting the industries on which the government focused the interest. Secondly, we build a composite indicator to rank the different industries according to their strategic importance in the Chinese economy. We compare the ranking to the list of strategic industries described in the Twelfth Five Year Plan. We find that, by and large, our ranking coincides with the list of strategic sectors of the Chinese government. 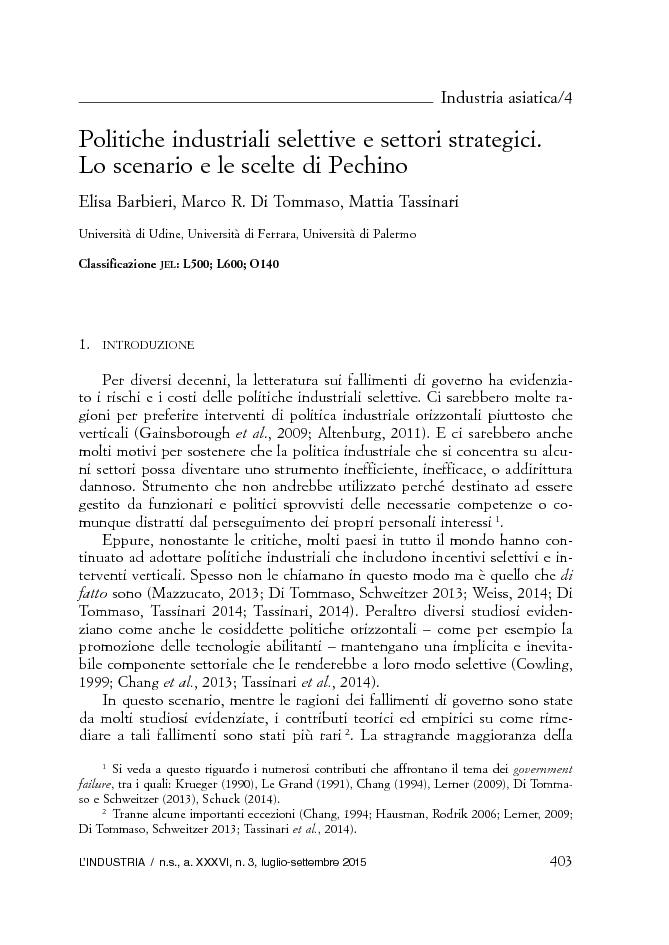