The concept of reputation has been used in every field of economic research, given its capacity to affect the outcome of all economic and financial transactions. The theoretical debate on reputation is very rich, but the mechanisms of reputation building have not been explored enough from the empirical viewpoint. In this paper we investigate the determinants of firm reputation taking into consideration the interactions between individual and collective reputation. This paper is one of the first attempts to provide robust evidence on the determinants of firm reputation using a large set of controls applied to a database not affected by self-selection bias. In fact, we constructed a new database containing the "universe" of wineries located in four regions of the North-West of Italy with an established national reputation and focus on the determinants of the «jump» from national to international reputation. Our research confirms the prediction of the theoretical literature and shows the positive effect of firm age, size, investments and producer's intrinsic motivations, and of collective reputation on individual firm reputation. Cooperatives seem to decrease their reputation when the number of associated members rises, due to free-riding and traceability problems. In contrast with previous research, relying on well-known external consultants does not acquire any outside reputation. Finally, by comparing the regression results on the determinants of national and international reputation it emerges the relevance of the mechanisms of the evaluation process: the higher proximity to the wineries of a national observer permits a better and more technical knowledge of the quality provided, allowing small "niche" producers with very low productivity to emerge and be known. For the same reason, the national classification system (i.e. the DOCG system) exerts a significant effect only on the international reputation of wineries, but not on the national one where the effect of collective reputation (i.e. the reputation of single denominations like Barolo) seems to prevail. 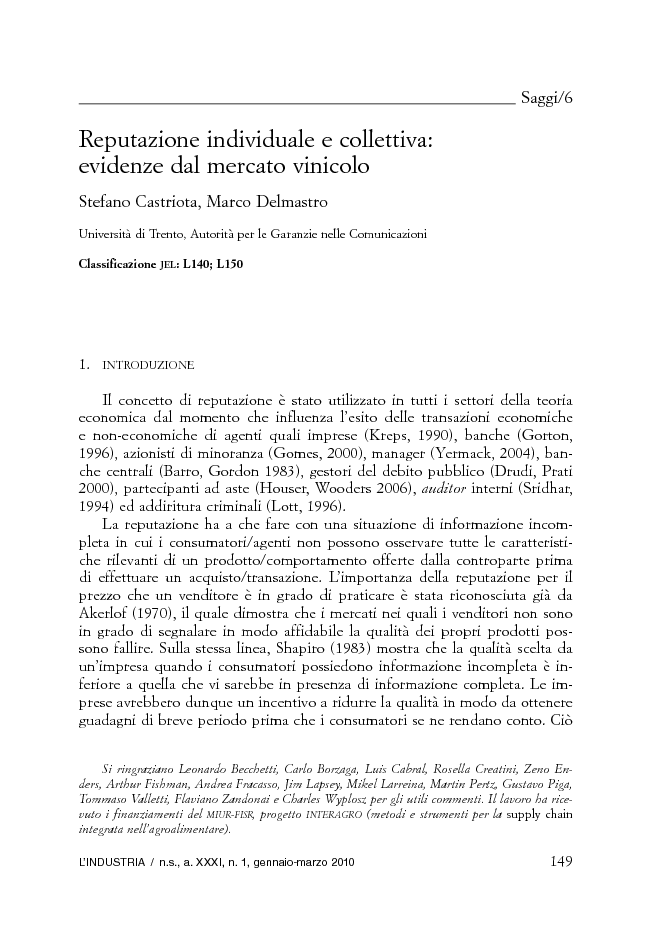