In recent years, China’s global engagement has greatly changed. This change accelerated and produced a growing transatlantic consensus on considering China as a strategic competitor and a systemic rival. Calls and debates about decoupling are to be understood in this context. Although over the past four years, the debate about decoupling experienced alternate events, China’s swift and pioneering recovery from the pandemic reignite it altogether with the ones about the existence of a China model and State capitalism. Within these debates and the recent narrative about China’s success, some authors focussed the attention on Chinese domestic political economy and changing global conditions, offering an alternative picture of the presumed success and hegemony prospects of the Country. Thus, in these ups and downs how to discern the actual effects of decoupling on China’s global economic projection? The present work aims at start disentangling this issue by analysing more closely China’s actual positioning and participation to global value chains (gvcs). This is done by analysing evidence collected from official international and Chinese data sources. Preliminary evidence show that not everything is as it seems. Chinese firms’ internationalisation has been found to be more pronounced than it is usually believed, especially in high-tech sectors. However, especially in these sectors, China has been found to be still rather dependent on other countries for exports, capital, intellectual property and knowledge. Some insights and directions to assess what impacts decoupling may actually have on China’s going global and implications for research and policy approaches are drawn. The need for deeper, industry- level, in depth and case-by-case analyses and researches is advocated. 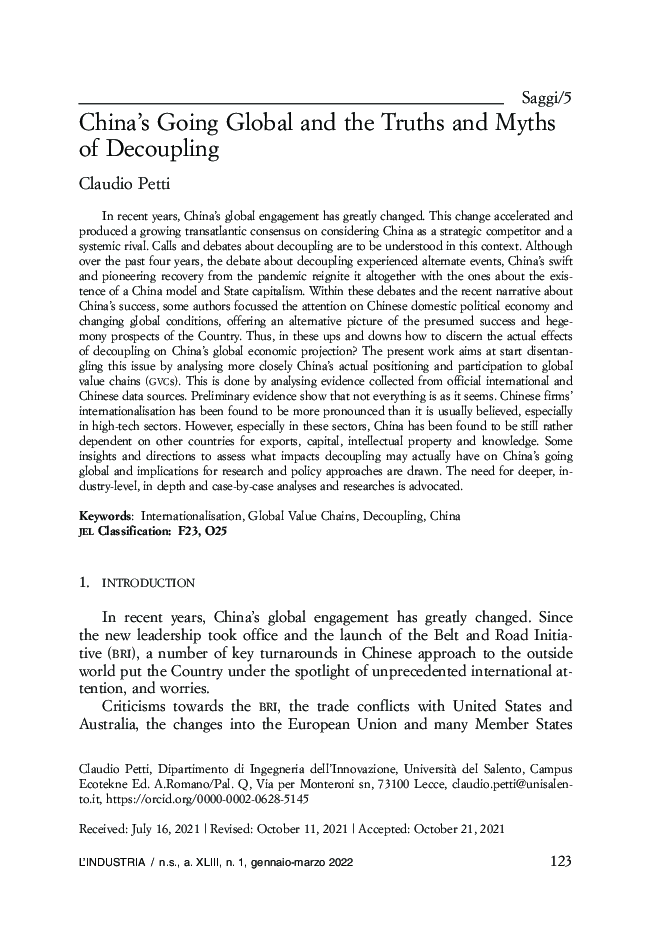