The study analyzes the evolution of the economic-spatial organization of Northern Italy over the last fifteen years, with the purpose of highlighting its internal differences and the progressive shift of the macroregion economic center of gravity from the North-West towards the North- East. This objective, however, requires to reflect on which unit of investigation is relevant for the economic-spatial analysis at the regional scale. Assuming the hypothesis of multiscalarity, the North is first disarticulated starting from the minimum economically relevant scale – identified in the single local labor system – for then variously re-aggregating these units to recompose the areas of extension of the agglomerative processes. The interpretation adopted is that recalling the role of density, a measure that incorporates in a non-arbitrary way the results of a more or less efficient allocation of resources with heterogeneous quality. The empirical strategy described here develops in three distinct steps. The first reports – mainly for descriptive purposes – the values taken by some relevant variables that illustrate the endowment of factors and the economic dynamic in the Italian territories, with particular reference to the different aggregations of the geographical units that constitute the Northern macroregion. The second step then investigates the correlation between density and economic performance at the finer scale of the local labor system, to understand whether, and to what extent, it is reasonable to expect that the divergence in regional dynamics of the North can be explained by differentials in terms of density. The third empirical analysis, finally, focuses on the relationship between density and performance at a more aggregated level to investigate the multiple scales in which the advantages of agglomeration are expressed. The composite evidence collected suggests that some of the sources of the competitive advantage acquired by the North-East in the last twenty years operate at a wider reach than that of the local labor market since a greater elasticity of the performance variables with respect to density appears to be clustered into a spatial entity that takes the configuration of a new industrial triangle. The presence of territorial networks with a larger extension than the functional areas examined requires deepening their shape and connective mechanisms 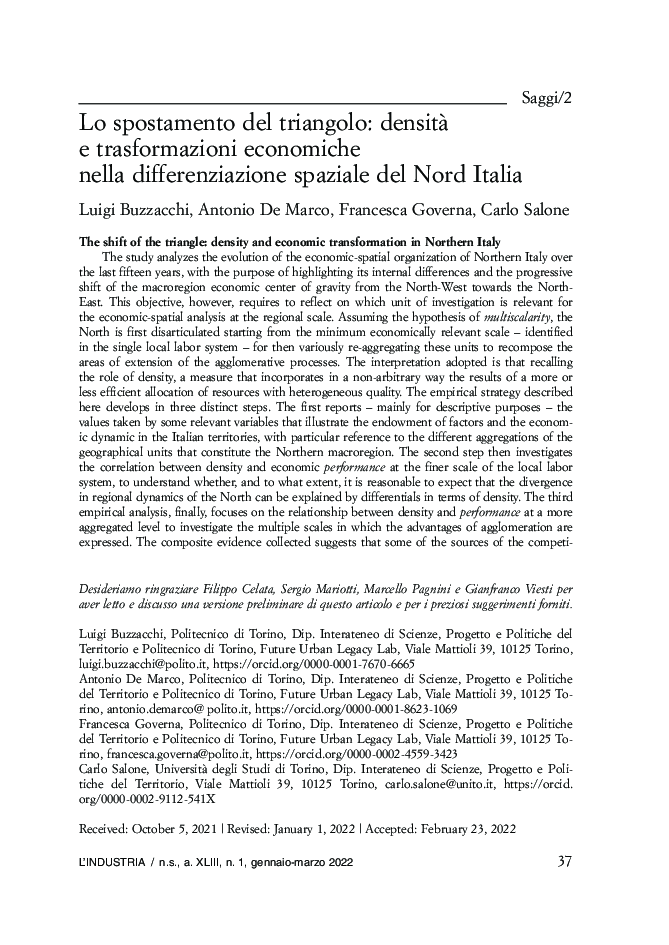