This paper introduces the basic methodology and general findings of the research project entitled «Public Policies, Local Governments, Gender Budgeting: Women Friendly Cities, Case of Turkey». The aim of the project was to analyse public policies at the local level, the services and expenditures of the municipalities in particular from the gender well-being perspective. Main driver of the research was the expectation that promotion of gender mainstreaming in public policy design would have reflections in resource allocation in those pilot cities, which committed to the United Nations Joint Program-Women Friendly Cities Project (UNJP-WFCP) in Turkey since 2006. Five WFCP cities in different geographical regions (Kars, Sanlıurfa, Nevsehir, Izmir, Samsun) were chosen and each was coupled with five neigbouring cities (Erzurum, Diyarbakir, Kayseri, Manisa, Ordu). Comparative analyses were conducted by: 1. gender auditing of policy documents; 2. cross-checking of perceptions of local service providers with those of local women beneficiaries; and 3. de-construction of municipality budgets on the basis of women's capabilities. Our well-being gender budgeting exercises showed that UNJP-WFCP cities were not much different from others in allocating funds to programmes that have the potential to enhance women's capabilities. We discuss the interaction of multiplicity of issues which need to be accounted for in assessments of current and prospective policy practices. 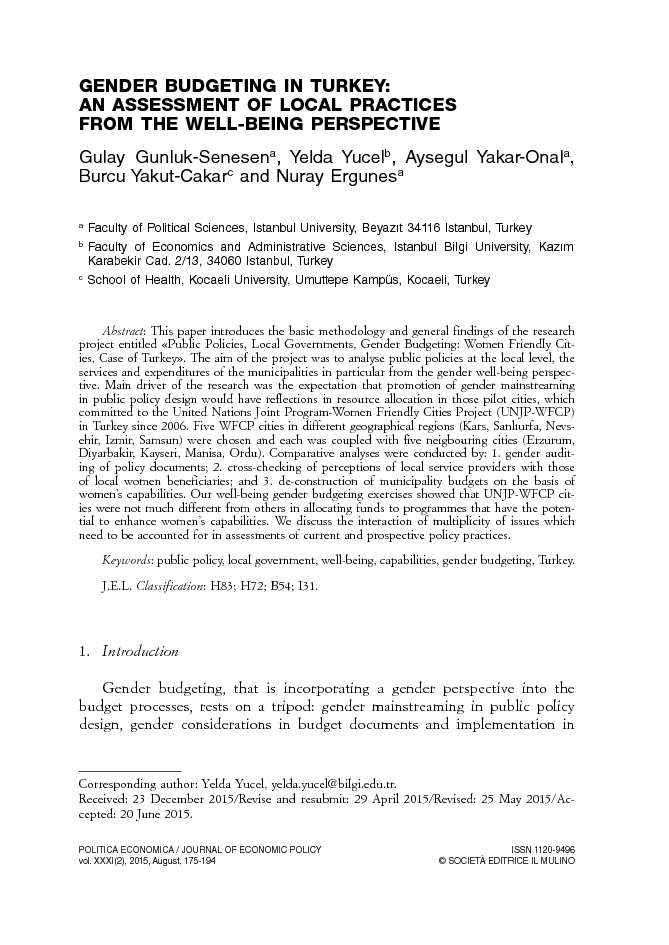