Italy is characterized by a mature PAYG social security (SS) system and by particularly adverse population projections. Given these trends, the contribution rate to the SS system is deemed to increase above the current high level. This hinders the development of employer provided pension funds and introduces a relevant wedge between labor cost and earnings that discourages both labor demand and labor supply. However, any proposal to reduce payroll taxes has to cope with the state of Italian public finances. Italy has to comply with the Stability and Growth Pact that imposes constraints on budget deficit and debt trends. We show that the replacement rate guaranteed by the PAYG system to a newly insured worker, contributing for 40 years, ranges between 44 and 88 percent, depending on his career profile, and between 56 and 113 percent if, as envisaged by current legislation, severance-pay contributions are fully used to finance a funded occupational scheme. We thus argue that a payroll tax reduction of 10 percentage points can still guarantee replacement rates in line with the European average: about 70 percent for a worker with an average career profile, working 40 years and retiring at age 65. Using micro-data from the Bank of Italy's Survey of Household Income and Wealth and official population projections, we estimate future employment trends under different demographic and macroeconomic scenarios and compute the cost of the transition. We show that the cost of the transition would be substantially reduced if positive effects on employment were induced by the payroll tax reduction. In particular, under the hypothesis that the pension reform had no impact on total employment, we estimate that the net cost for the PAYG system induced by a 10 percentage point reduction in the contribution rate would range between 0.02 and 1.8 percent of GDP in the first year, depending on how gradually the reform will be phased in. If the payroll tax reduction increased employment (by approximately 120,000 units a year until 2025), then savings would start offsetting costs as early as in 2030 and the reform would be entirely self financing. 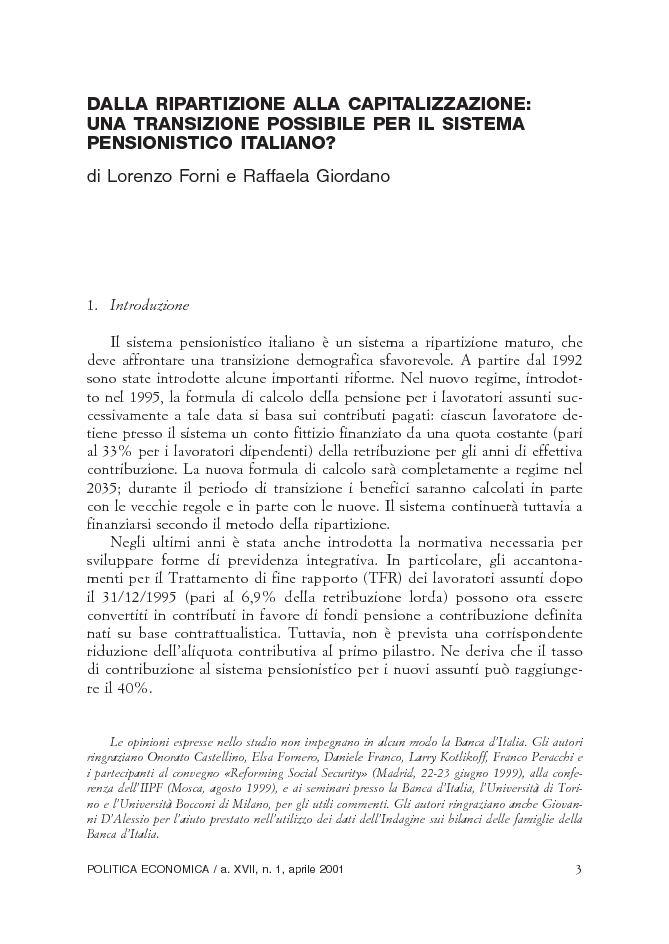