We study the origins of the nonlinear, endogenous, theory of the business cycle, in mathematical modes, within the framework of a macroeconomic theory, which was itself going through its own formal "birth pangs" at the same time, in the same years. The first part of the story begins in 1928 and ends, with the publication of Yasui's classic on Kaldor, Hicks and Goodwin, in 1953, and Hudson's classic of 1957. But there were other classics in the 1930s, even within some theories of the business cycles of the time - particularly the Austrian and that which may now be called the "time-to-build" tradition, which originates in Marx and Aftalion, independently, and reaches its nonlinear formalization origins in Tinbergen's work of 1931, followed by Kalecki's theories of the business cycle, substantially influenced also by Tinbergen's classic for mathematical method. There is also what may, for want of a better name, be called the "cobweb" tradition, on the one hand, and the tradition of Swedish Sequence Analysis, on the other (especially in the 1937 classic work of Lundberg, summarising the Swedish discussion on business cycle theory). The former having its origins, partly, in Austrian inspired search for an integration of dynamic method with equilibrium economic theory (especially represented by a series of classics by Rosenstein Rodan, from about 1929); and partly in the well known phenomenon of lagged responses in the supplydemand interactions in agricultural and commodity markets, particularly elegantly formalised by Leontief in 1934. From the point of view of economic theory, they were all part of the emerging consensus on the need to incorporate money and fluctuations in non-trivial ways as intrinsic components of orthodox equilibrium economic theory which was characterised as static theory. The implication was that the search was for a synthesis of dynamic method with traditional static equilibrium economic theory. The origins of macroeconomic theory, generally attributed to the post-depression development of monetary theory, business cycle theory and the theory of policy, could be traced to this particular search for a synthesis and was brilliantly summarised by Kuznets in a series of pioneering contributions in 1929-30. The story we try to tell is of mathematical business cycle theory in its non-linear modes, and how it emerged from one strand of macroeconomic theory, which, as just mentioned, was itself being forged, ab initio, dynamically. 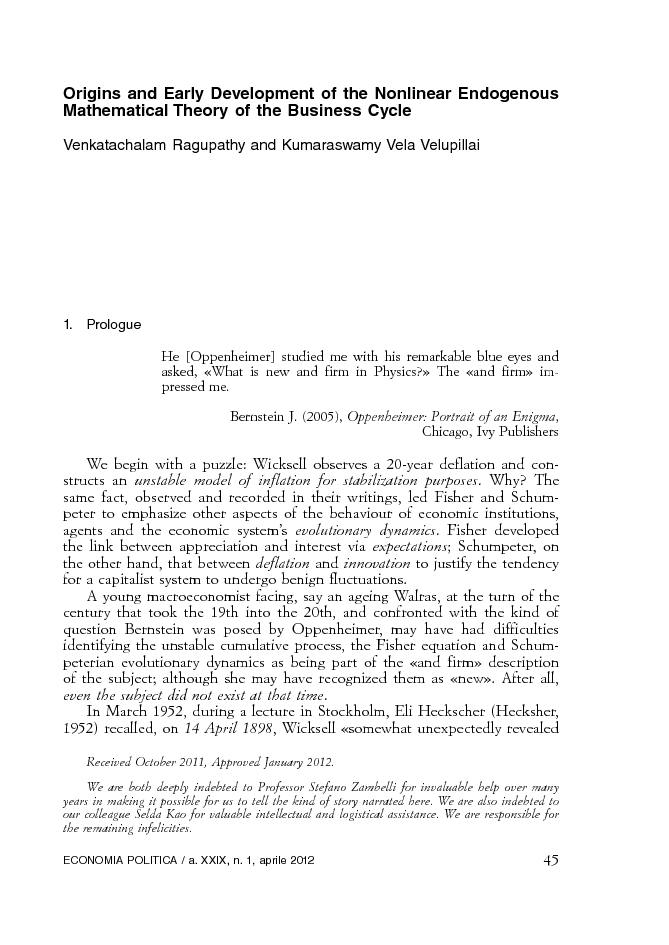