About four years after the outburst of the worst economic crisis since the Great Depression the economics profession has not been yet able to work out some of its main features and the relevant exit strategies are still open-ended. Above all, it is amazing how little we learned from the long inventory of banking currency and sovereign crises experienced in the recent past. In contrast, when we consider how the political agenda is urging for stress tests for EU treaties in an effort to face the economic, geo-political and energetic crises experienced in the last four years, the need of a thorough reappraisal of the basic economic notions and tools is evident. For this reason the present crisis can be a valuable research laboratory, at least as important as the one that in the '30s brought John Maynard Keynes to revise his theoretical framework. Starting from a perspective of study which is mainly aiming at understanding the joint evolution of economic systems and institutions, in this paper I will focus my attention on three main research questions and, at least in a preliminary way, I will try to answer them. The first research question is: after about four years from the materialization of the worst global economic crisis since the '30s, what do we know about its nature, determinants and exit guidelines? The second research question move off from the recurrent use of emblematic new concepts in the present economic debate. I will first investigate to what extent the notion of «systemic failure» can be relevant. Afterwards I will examine the notion of «social goods». In order to better understand and manage the global crisis do we need a theory of systemic failure and social goods? The third research question deals with solutions. «Legal global standards» have been discussed even if in an erratic way in the international negotiations framework. To the extent that they represent a realistic device, can we find in them at least partial solutions to one of the most worrying features of the crisis: the governance deficit? My conjecture is that the actual victim of the present crisis is the approach to the new global economy governance underway after the Berlin Wall fall in 1989, which paved the way to the transition process in East and Central Europe, German reunification and dramatic changes in global interdependencies still in evolution. This approach has strongly influenced also the last stage of the EU enlargement, leaving unsettled or even unexplored some of the key institutional features of the subsequent stage of integration. The conclusions will stress how broad production factors accumulation turns out to be decisive and minimum threshold effects become more and more substantial. This is why theoretical models and economic evaluation tools have to be updated in order to take into consideration these evidence. 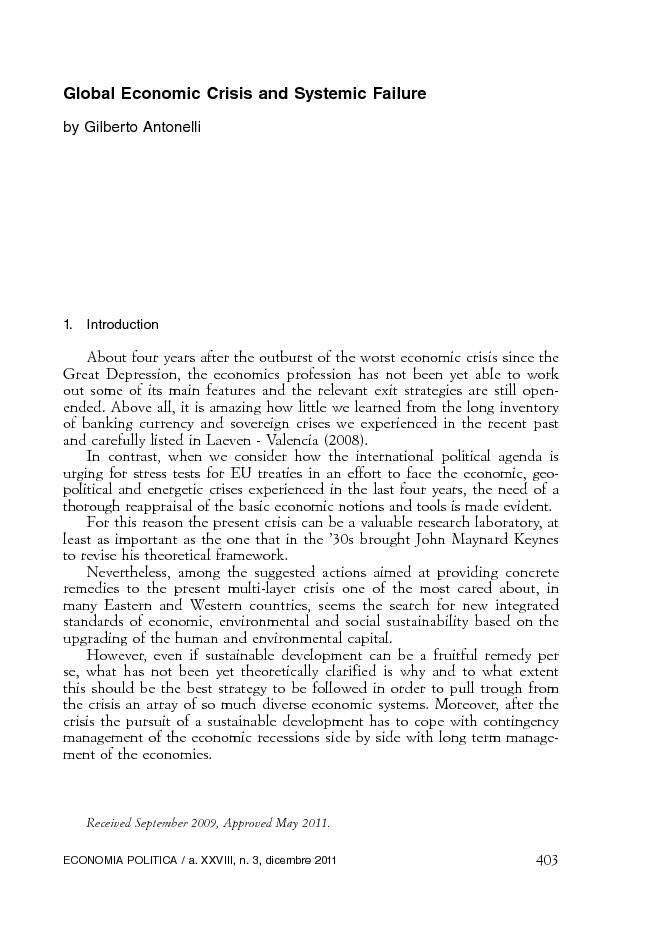