In this note we consider some recent books of two remarkable Italian personalities who deal similar topics with very different, but complementary, competences. The topics are those of globalization, European Union, euro. The authors are Giovanni Maria Flick (who is professionally a lawyer now member of the Italian Constitutional Court) and Tommaso Padoa Schioppa (who is a central bankers now member of the Executive board of ECB). G.M. Flick with his important book (La globalizzazione dei diritti. Il contributo dell'Europa dal mercato ai valori) argues that EU with its Chart of Fundamental Rights has explained to the world how a construction known mainly for its economic nature can be oriented with values such as human dignity, freedom, equality, solidarity, citizenship, justice. Giving in such a way also a paradigm for the building of the democracy in other situation previously characterized by wars. T. Padoa Schioppa with his two books (La lunga via per l'euro; L'euro e la sua banca centrale) gives a remarkable contribution to the understanding of euro from many point of views. We stress the books from two sides: one explains the institutional, historical and political events which brought to the euro; the other explain the working of euro and ECB inside the complex structure on a currency without a State. Finally the author argues that EU is a model liberal and communitarian which is different from the America economic democracy and that the success of this last does not imply that UE must change its model which must be improved. 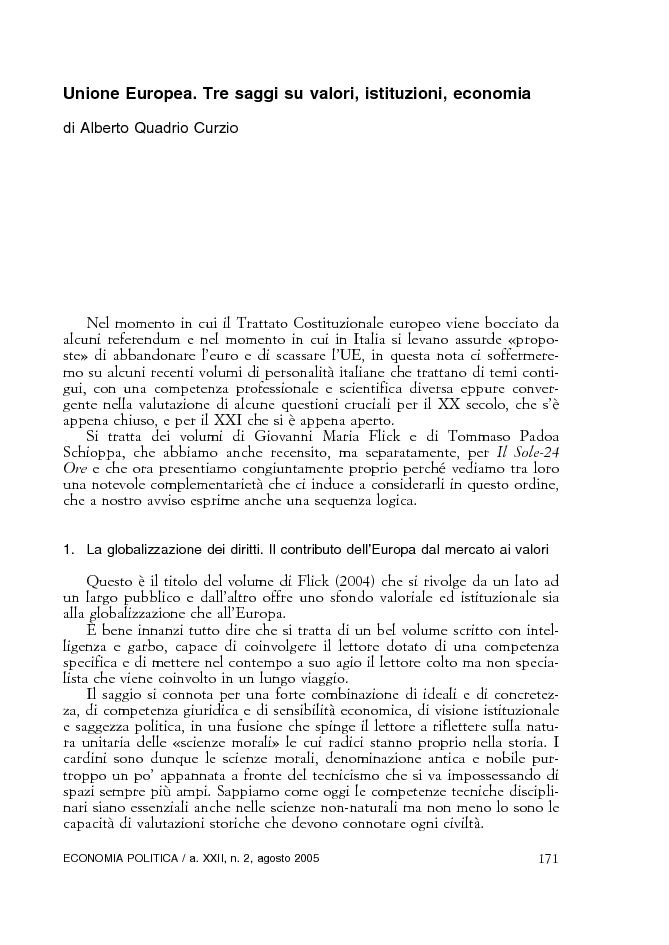