The paper deals with the transaction of labour within the Learning Organisation (LO), i.e. the organisation which turns knowledge creation and knowledge sharing into critical success factors. The model of the LO has gained increasing attention from both the managerial and the academic world thanks to its prospective capability to deal with higher degrees of uncertainty and change than the "traditional" Fordist-Taylorist organisation. In the LO the emphasis on workers as potential knowledge creators derives from recognising the presence of an "intellectual" component into the supplied effort. As a consequence, the metaphor of labour as a "material resource" results no more suitable, and new mechanisms are needed to motivate and to fuel the employees' commitment. In particular, the paper models the interaction among workers at a LO where the principal sets a bonus for those who provide the better performance both in terms of physical productivity and organisational knowledge increase. The workers' commitment to the LO's targets results from the contemporary presence of both co-operative and competitive forces. The model, which builds on Akerlof's model of "gifts exchange" between employer and employees and on the closed rank tournament theory, has been implemented into a simulation programme which relaxes the neo-classical constraint on the individuals' perfect rationality. The parameters driving the tournament outcome relate to the environment where the LO operates, on LO itself, and the characteristics of workers, which are allowed for not homogeneity. The simulations point out the existence of a threshold for the intensity of competition, beyond which the benefits resulting from the accelerated accumulation of organisational knowledge are more than balanced by the lack of motivation of those workers excluded from the competition for the higher bonuses. The simulations also show how the co-operative rather than competitive nature of industrial relations within the LO depends from the boundary conditions which shape the internal and external labour markets. 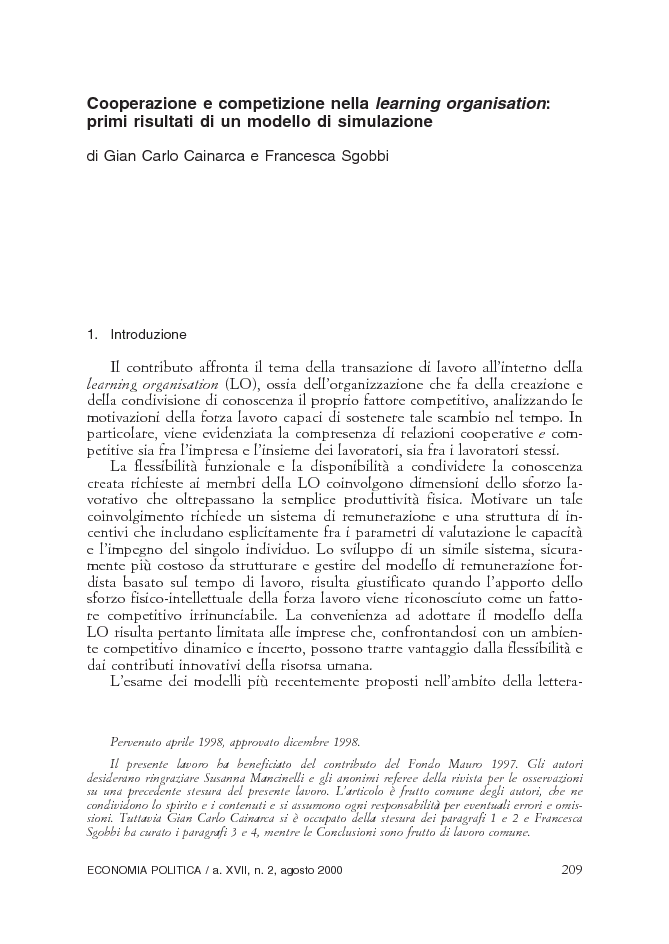