This paper illustrates some of the main results within local public finance, focusing on the relationships between local public goods (LPGs), club goods and fiscal federalism theories. The paper also considers competitive federalism and functional federalism, two models recently proposed in order to overcome the limits of traditional theories on LPGs and fiscal federalism. The analysis especially concentrates on functional federalism. Initially, section 2 gives a broad definition of local public goods (LPGs), pointing out the analogy between this category of collective goods and club goods. Section 3 analyzes the main contents of competitive models of LPGs supply developed by Tiebout, Buchanan and Berglas. Section 4 underlines the limits of these models and shows how many factors give rise to a LPGs market characterized by a restricted number of local jurisdictions. In section 5, after illustrating the fiscal equivalence principle, the fundamentals and the conceptual limits of traditional normative theory of fiscal federalism are exposed; moreover, it is shown how a model of competitive federalism could overcome the drawbacks of traditional normative approach, by resorting to some properties of the competitive models of LPGs allocation. Section 6 analyzes the theoretical foundations and some examples of the model of functional federalism; given the existing framework of local governments, functional federalism can minimize the shifting from the fiscal equivalence principle, being based on the formation - through cooperative agreements between individuals or local communities - of a system of single or multi-function jurisdictions each corresponding to a optimally sized club providing a LPG or a set of LPGs. Finally, section 7 suggests some directions for future research. 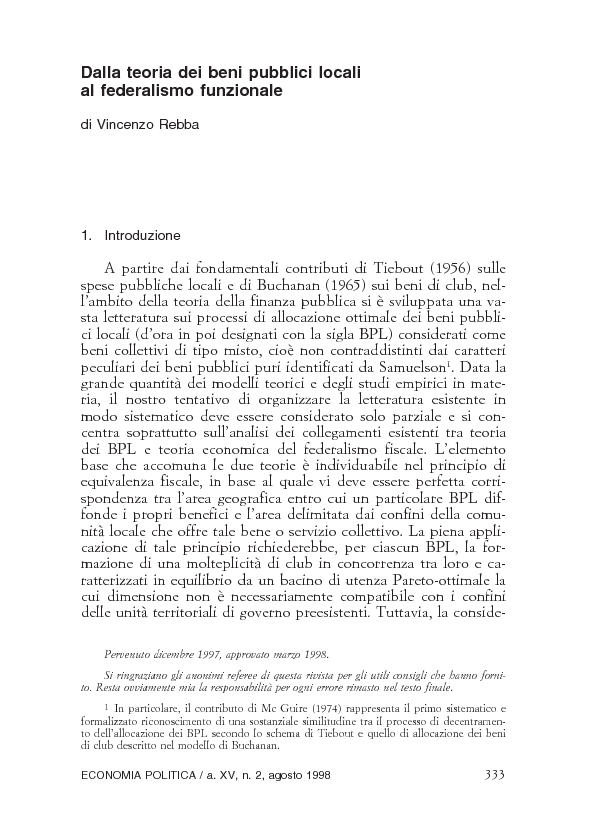