The paper suggests an accounting scheme of the impact of demand side factors, i.e. growth, composition and distribution of income, on the determination of changes in the aggregate balance of employment. The level of employment warranted in a system is here derived from the application of a simple scheme which we have called, following the contributions of Richard Kahn and John Maynard Keynes in the '30s, the "employment multiplier". Starting from an accounting identity between the values of aggregate supply and demand, a level of "warranted" employment is derived, given the labour coefficient and the deflated values of final demand, in which autonomous components are distinguished from an induced component, this latter depending on total labour income. Thus, the variations of aggregate employment for a country can be decomposed into the effects of the contributions of three components: growth of average productivity of labour, growth of "autonomous" demand components, and variations of the "multiplier", a term which summarises the impact of wage share and consumption propensity on induced demand and again on the level of overall employment. On the basis of this framework, we have worked out a quantitative assessment with temporal comparison within a national context. The aim has been to rebuild the employment pattern for Italy "warranted" on the factors indicated above, with specific timing in the period 1960-1996 required in identifying differential behaviours of the relation between employment growth and production growth. 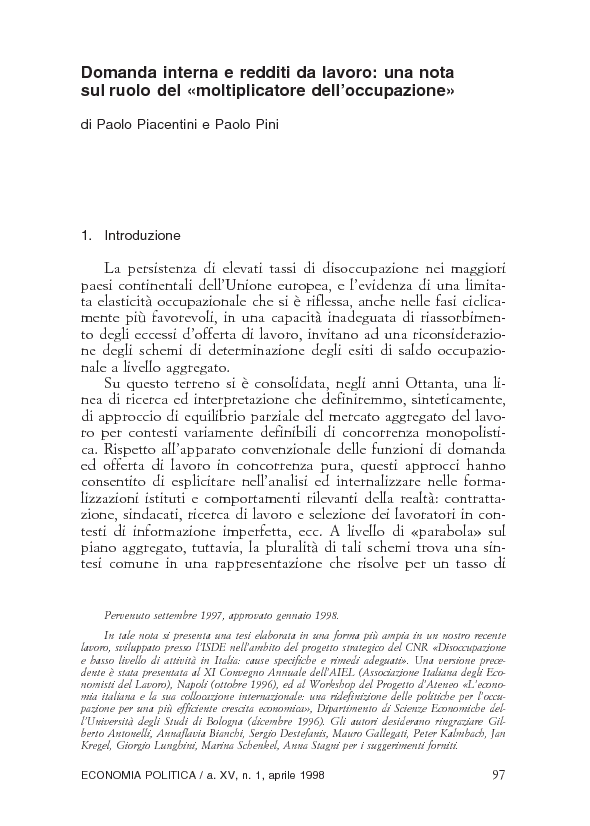