According to Morishima's Fundamental Marxian Theorem, the profit rate is positive only if workers are exploited. However, J.E. Roemer showed that the exploitation of labour is equivalent to the exploitation of any other commodity. The profit rate is positive only if the quantity of any commodity directly and indirectly required for the production of a unit of the same commodity is lower than one. Thus labour seems to play the same analytical role as any other coefficient of production. However, Roemer changes some fundamental premises and definitions of the classical and Marxian theory of surplus. In particular, in his view, there is no difference between the technical conditions of production and the social conditions of reproduction. In this framework, labour is considered a commodity produced as any other input of the production. On the contrary, the Classical economists never identified the human activity of production with the result of this activity and, in particular, with the resulting means of production. Accordingly, they distinguished between the "net product" that remains after the material conditions of production are reintegrated and the "surplus" that remains after the social conditions of reproduction are reintegrated. Thus, in Marxian terminology, the "surplus value" is defined as a part of the "new value" that emerges in the productive process. This article shows that there are some substantial analytical differences between the coefficients of labour embodied in goods and the coefficients of commodity embodied as defined by Roemer. These differences acquire relevance when we consider Marx's conception of how the net product emerges and the way in which he defines "new value". 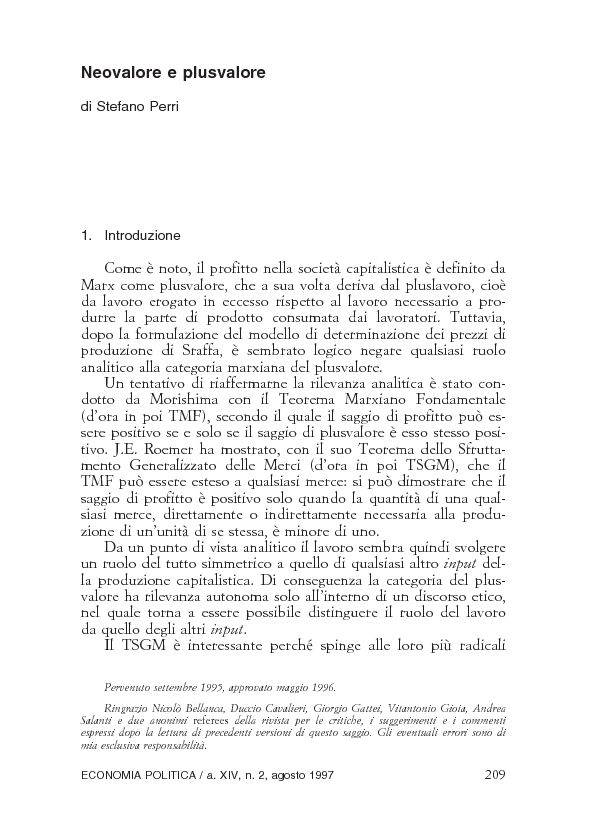