In this work we reconsider the issue of optimal dynamic taxation of interest income. We show that by adopting a "dynastic" model we can encompass a number of developments concerning the violation of the Judd (1985) and Chamley (1986) long run zero tax rule, which so far have been worked out in heterogeneous frameworks by the most recent literature. In fact, in our model we can shift from an infinitely lived representative agent (ILRA) model to an overlapping generation (OLG) one by simply allowing for the entry of new dynasties and for limited (i.e. intradynasty) altruism. This mechanism brings about a "disconnection", in that in each period a portion of new individuals getting into the economy are not cared about by any existing agents; it is for this reason that "age" of each dynasty turns out to play a crucial role as for capital income taxation. The first factor we discuss is the shape of the utility function: in particular, following the insights of some recent works (see, for istance, Judd (1999), Atkeson et al. (1999) e Erosa-Gervais (2001)) we stress the possibility to interpret the outcomes of dynamic models by resorting to the principles of the optimal taxation theory in static environments, namely, the Ramsey inverse elasticity rule and the Corlett-Hague rule. Moreover, this element marks the difference between ILRA and overlapping generations (OLG) models, in that in the latter setup the presence of life-cycle behavior implies that the elasticity of consumption is not constant over life and, more importantly, even at the steady-state (Erosa-Gervais (2002)). As a result, in OLG models the long run tax rate on interest income is in general different from zero. Hence, the shape of the utility function has been considered the key factor in delivering the optimal tax rate. In the rest of the paper we present two other sources of nonzero capital income taxation (see De Bonis-Spataro (2003a) and (2003b)): a) the difference between the government and individual discount rates and b) the disconnection in the economy. As for the first factor, the violation of the JC rule stems from intuitive Pigouvian arguments, since the policymaker tries to change the pattern of individuals' consumption by levying taxes on capital income. However, when the government is less patient than individuals, the deadweight loss brought about by distortionary taxation explodes to infinity so as to overwhelm the welfare gain of the Pigouvian correction and, thus, to impede hitting capital income. In fact the role played by the distortion disappears when the utility function is separable and logarithmic, since the intertemporal pattern of consumption demand is unaltered by future interest taxation and, thus, the distortionary effects of the announced policy are neutralized. As for the second source of taxation, which occurs, for instance, in the case of OLG setups with migration and/or limited altruism (i.e. towards some of own descendants only), it can be explained as follows: in this scenario private agents are accumulating wealth at a too high rate, since they do not take into account the extra resources provided by the arrival of new individuals, which allows for a redistribution of the taxation burden. Consequently, the capital income tax, by lowering the rate of capital accumulation, acts as a corrective instrument. Finally, we sketch some recent advances which have extended the analysis to more complex environments, such as financial market imperfections, endogenous growth, uncertainty and several kinds of heterogeneity among individuals; in particular, we shed light on the relation between the results delivered by these models with those discussed above. 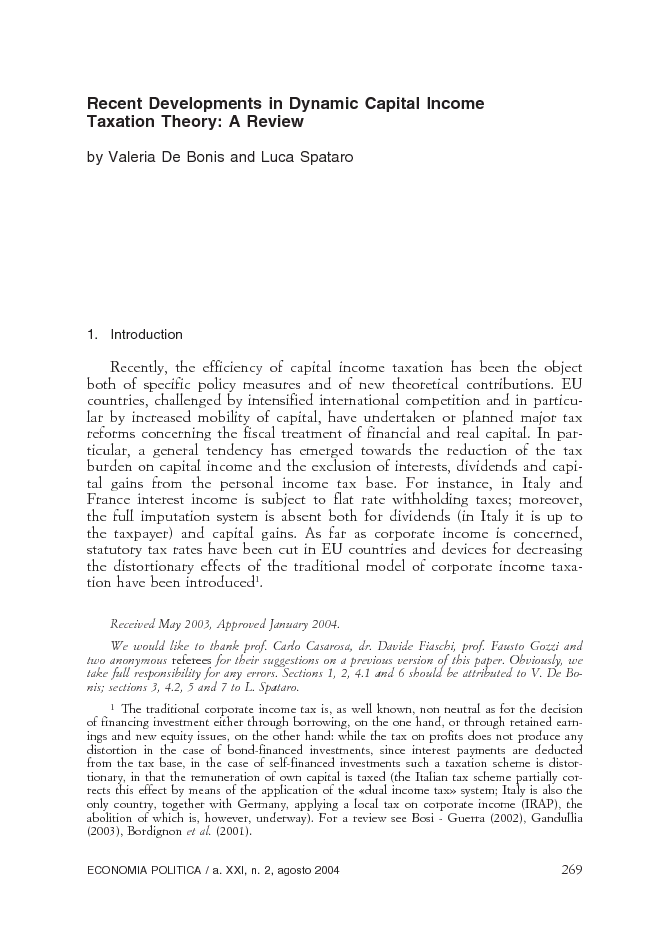