The objective of this paper is that of evaluating empirically the process of convergence across the regions of the European Community, within a framework of core and periphery locations. To this regard, two different perspectives are present in the literature: the neoclassical model predicts that the free mobility of factors will enhance convergence, whereas the new growth models suggests that the process of European integration will only magnify divergence tendencies. Having defined peripherality on the base of GDP per head, the 165 regions are divided in four macroareas: central, intermediate, inner peripheral and outer peripheral "sigma" and "beta" convergence are estimated for the period 1981-1994 and for the whole sample, and then for subperiods and subsamples. The results show that the highest speed of convergence is experienced by the intermediate and inner peripheral regions (about 10%), whereas the two extreme groups in terms of locations exhibit an estimated "beta" of 3%; however a different pattern is concealed beyond this result. In fact splitting the sample in two subperiods (81-87, 88-94), it can be observed that the outer peripheral fall in the first subperiod but recover in the second (just the opposite happens for the central regions), and therefore the effect of reducing disparities by the European regional policy with large redistribution within the Community after 1988, seems to be caught by the process of convergence. 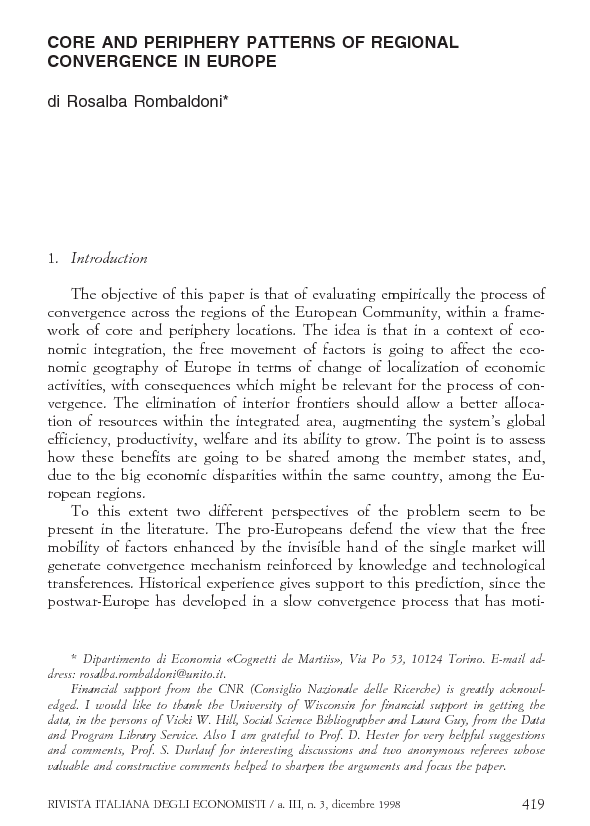