According to Aghion et al. (2007; 2008; 2010), the research performance of universities is positively correlated to the amount of budget per student. Italian universities usually perform poorly in international rankings, while the English university system is widely recognized as one of the best in the world. In this paper, Italian university funding is discussed by comparing data from the consolidated financial statements of English and Italian universities. The main results indicate that English universities are on average much better funded than Italian universities, from both public and private sources, but there are no noticeable differences in the amount of block grants per FTE student received by the State (FFO and Recurrent Grants, data 2007/2008). There are differences, however, in the share of the public block grant distributed competitively after an independent quality assessment of research activity. In England, this share amounts on average to roughly one quarter of the grant. In Italy, a quality assessment has recently been introduced but it involves only 7% of the grant (2009 data). The gap in the total available resources between the two university systems is due to two other main sources: student fees and research funding. The gap in research funding is both quantitative and due to the way in which resources are allocated. In England, research funds amount to 47% of the block grant, while in Italy the share is only 21%. In particular, the amount of public funds available for research is 12.5 times higher than in Italy, a huge difference. More importantly, two-thirds of total research funds are awarded through peer review and open competition, compared to Italy's one-fourth. The lack of funds and the lack of incentive effects due to the limited role of open and competitive allocation of resources can explain the poor research performance of the Italian university system. 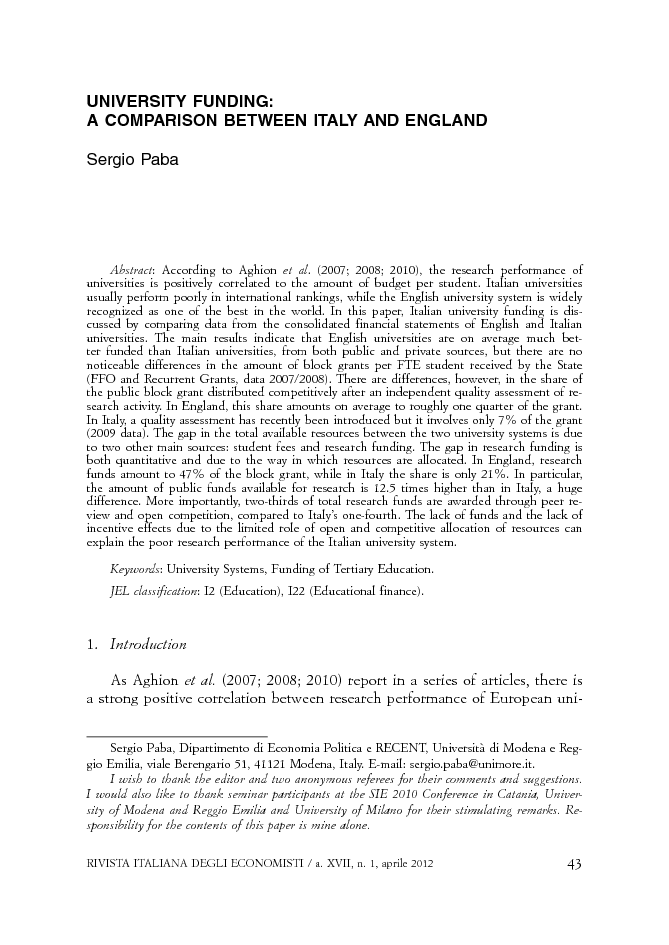