The paper deals with the long run positive relationship between the long term rate of interest and the level of wholesale prices, a relationship dubbed by Keynes the "Gibson Paradox". This correlation, before Keynes, puzzled other important economists such as Wicksell and Fisher, who attempted, in different ways, to reconcile this empirical regularity with marginal theory. Modern variants of these interpretations were suggested by M. Friedman, T. Sargent and others. Recently, a non-neoclassical interpretation of this correlation was put forward by M. Pivetti, within the exogenous theory of distribution suggested by P. Sraffa as an extension of the classical political economy approach. While in Pivetti's intepretation lasting interest rates changes will influence prices directly, as they are a component of normal costs, the authors, following hints by Keynes and Triffin, suggest that for industrialized countries another, more indirect, route may be at work also affecting normal costs, namely the influence of interest rate changes on the price of imported raw materials. Attention is focused on two "central" countries (respectively, the UK and the USA) and the comparison of two long disinflation periods, the "Great Depression" at the end of nineteenth century and the "Great Disinflation" of the '80s of this century. The authors' conclusion points to the powerful efficacy of restrictive monetary policies as an anti-inflationary device, though through routes different from those usually stressed in the literature on credibility and disinflation, and emphasize the important drawbacks which may emerge, "per se" and with respect to alternative policies, if one looks at the sistemic and long period effects of these measures. 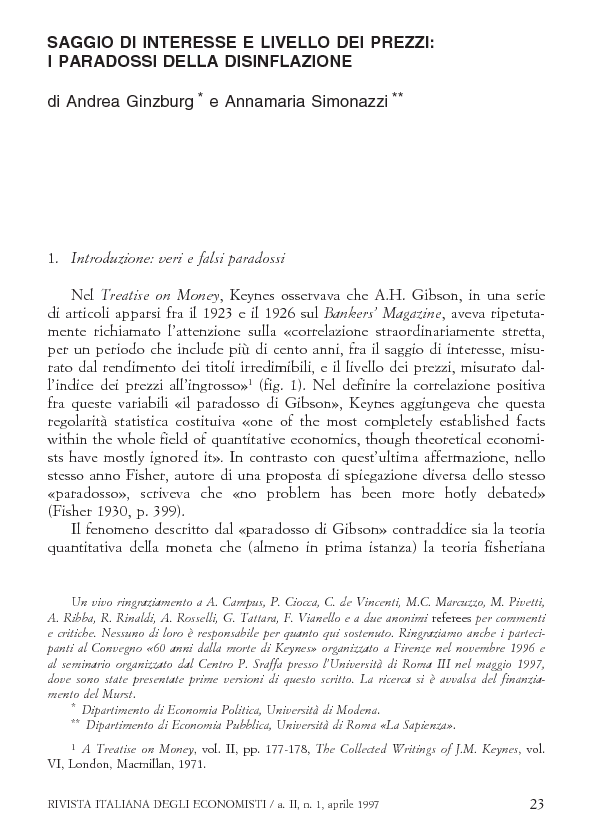