In Italy over the last decade non-typical labour contracts have been increasingly used. Among them, much attention has been paid to the so-called "collaborazione coordinata e continuativa" (co.co.co.) contracts. These contracts may provide a buffer to entrants, displaced or retiring workers, i.e. they can complement standard open-ended dependent contracts during career transition phases. However, if they become a substitute for standard contracts in every phase of the working career, then a segment of workers at-risk-ofsocial-exclusion could emerge. Hence, it becomes crucial to analyse the careers of co.co.co. workers. Our first goal is to learn if, within the "co.co.co. world", a group of at-risk workers actually exists; then, we will try to shed some light upon those workers' careers. We use a dataset unique to Italian labour research, the Work Histories Italian Panel (WHIP). It is a longitudinal random sample of individuals drawn from the social security administration (INPS) archive; through WHIP the co.co.co. archive ("Gestione Separata") can be linked to other archives (e.g. the private sector dependent workers' archive) and can be observed for the longest time span available for this type of data at the moment, i.e. from the birth of the "Gestione Separata" (1996) to 1999. It becomes apparent that two different groups of individuals contribute to the "Gestione Separata": highly skilled individuals, who enjoy a good position in the labour market (managers and professionals) and the ones we call "parasubordinati strictu sensu". "Parasubordinati" are young, receive lower annual wages and most of them are women and/or low-skilled. The brevity of the available time series (only one year for "parasubordinati strictu sensu") reduces the longitudinal analysis to the very short run. We observe a very gradual inflow into the "Gestione Separata" of the 1999 stock of "parasubordinati strictu sensu". The estimated probability to switch to a dependent labour contract seems to be higher for younger, low-paid individuals, particularly if they move geographically. Finally, and predominately for women, the co.co.co. contract seems like an alternative to a part-time job. 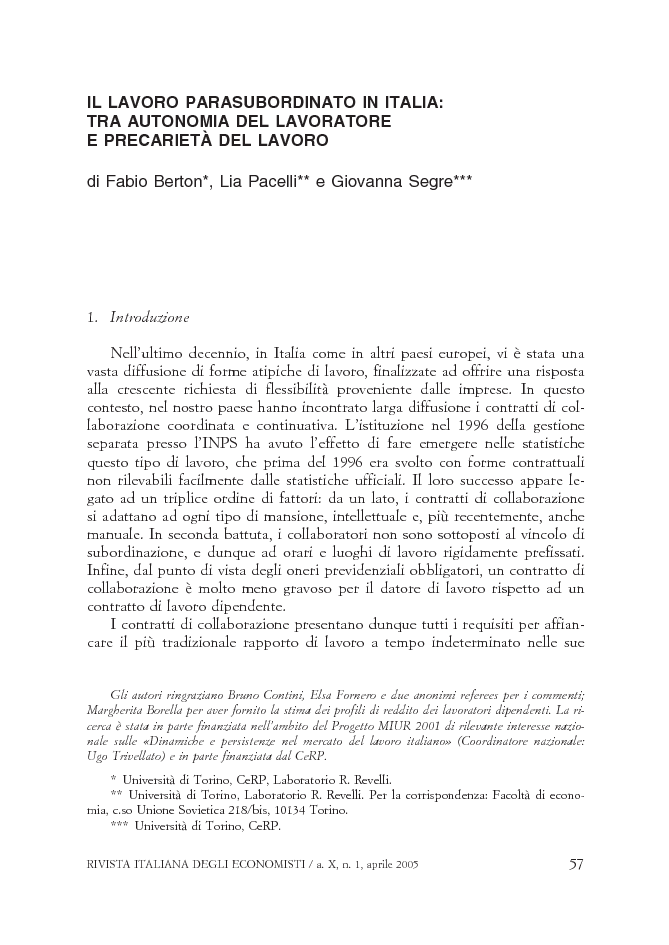