The rapid process of China's economic development and the recent access of China to WTO are receiving greater attention for its impact on future world scenarios. In particular a large debate has been developed on China's food security and its influence on world food markets. However, the analysis carried on have incurred several limitations, not only for the size of the country, but mainly for the scarce availability of information. In particular, the knowledge of agriculture and rural areas was incomplete and fragmented until recently. This caused, among other things, controversial expectations for food security in China, that were progressively revised downwards, from the alarmist positions of an increasing food deficit in the mid-90's, to the recent evaluations very close to food self-sufficiency. In fact, the recent downwards estimation of China's food deficit was partly due to the results of the agricultural Census which revealed the presence of cultivated land larger then previously estimated by official statistical sources, allowing for possible new future increase of the yields of the main agricultural output. The First National Agricultural Census in China, made in 1997, overcame, for many aspects, the lack of information on rural China. The Census represents the greatest statistical survey ever carried out in the world, with over 214 million rural households surveyed. We will analyse the main typologies of farms (households and non households) now existing in China after the extensive application of the agrarian reform started in 1978. In particular we will underline the presence of mainly non agricultural households (part-time farms) who play a relevant role for regulating and stabilizing the relation between off-farm jobs and on-farm works. The creation of a so large number of agriculture households and the nowadays relevance of part-time households could explain the past and the present contribute of agriculture to political and social stability of the rural China. The presence of relevant regional and territorial differences in agriculture and in rural China, with its potentialities and difficulties, will suggest the necessity for differentiated agricultural and rural development policies. The availability of the results of the agricultural census could be the basis for future detailed and compressive knowledge of the immense reality of rural China. 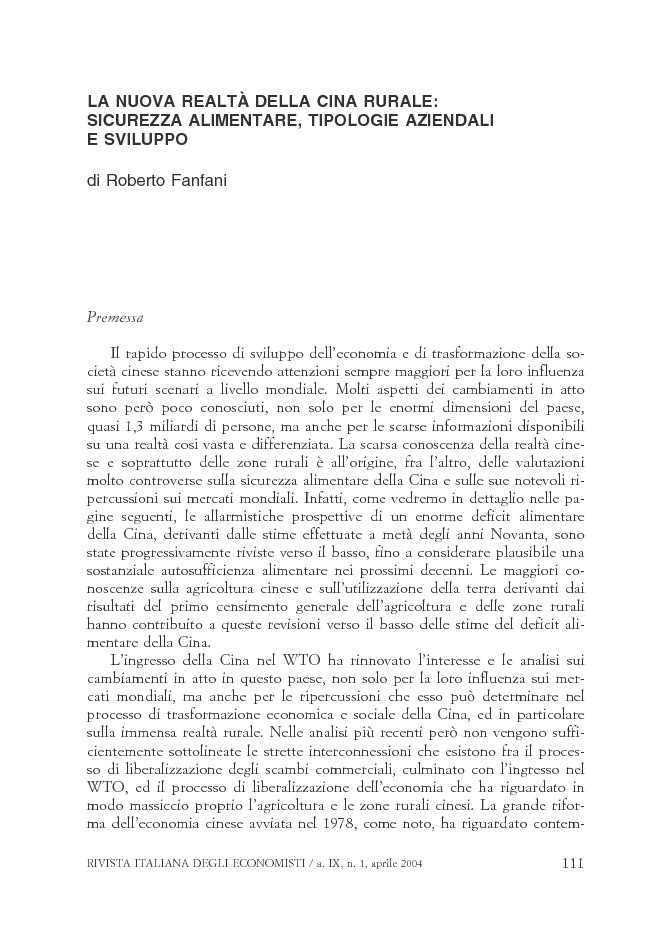