This essay examines the small Partito dei Comunisti Italiani (Party of Italian Communists), born as a split of the Partito della Rifondazione Comunista (Communist Refoundation) at the end of 1990s and once again in office after the 2006 Italian general elections. The aim of the essay is to explain which institutional, symbolic and material resources enabled the rise and persistence of such a party. Two different thematic frames are involved: the evolution of the communist party family in Western Europe; the study of party transformations in Italy. Three topics are addressed: (a) the genetic process and the party model; (b) the political culture and identity of the Party; (c) the features of the ideological and identity niche and the coalition one. From this latter viewpoint, the Party of Italian Communists is sketched, on one hand as an organized expression of the nostalgia and reminiscences of the disappeared and strong Italian Communist Party and, on the other hand, as a loyal member of the centre-left coalition (the Unione) together with the two other Italian political parties deriving form the communist tradition (Ds and Communist Refoundation). The empirical basis for this research work was party official documents, survey to party national congress delegates and open interviews. Despite its small electoral dimension (2.6 per cent in the 2006 Italian general elections and 16 MPs in the Chamber), the Party of Italian Communists must be considered a relevant party of the bipolar setting and high fragmented Italian party system. 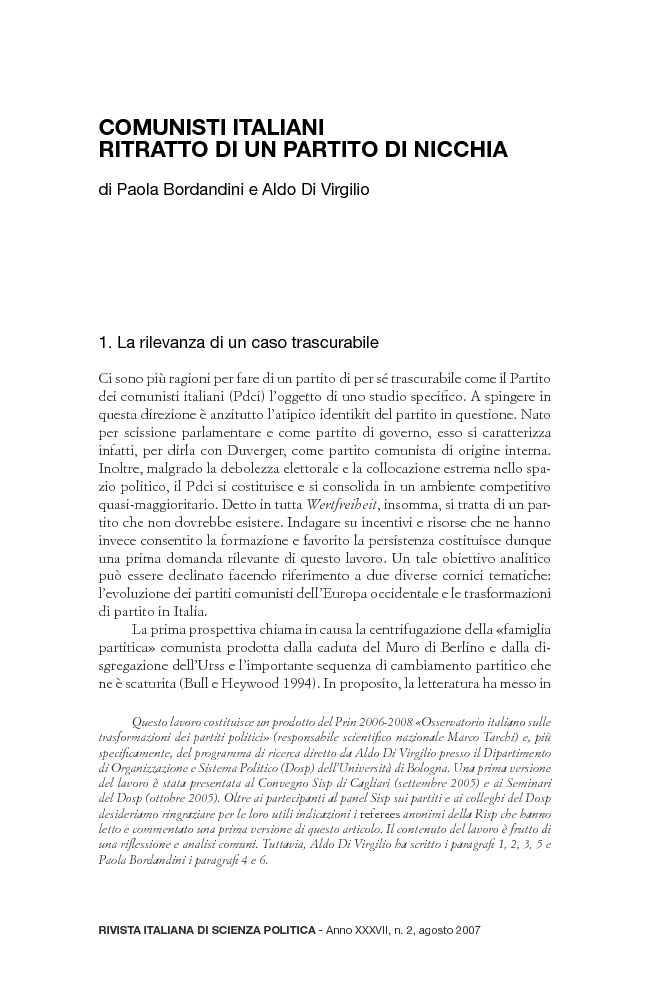