On April 16th elections were held in fifteen out of the twenty Italian regions. For the first time people chose directly the chief executive of their regional governments. Nevertheless, these elections were "national" in character in that both parties and voters considered them a test in view of the general elections scheduled for spring 2001. Firstly, this paper deals with the making of electoral alliances and with their internal regulations. Compared to previous elections, both the center-left and the center-right coalitions were able to broaden their range and therefore to adapt more efficiently to the constraints and opportunities determined by the electoral system, the only relevant party left out from this inclusive strategy of alliances being the Lista Pannella/Bonino. Secondly, this essay analyses the outcome of the elections. The center-right coalition won eight regional governments and performed even better in terms of total votes, having got over 1.5 million (plurality) votes more than the center-left coalition, meaning a 6% overall margin. The geography of the electoral results also shows that the South is the only competitive area in the country. The last topic discussed in the article is what these regional elections have represented with reference to the Italian political transition and, more specifically, to the process of party system restructuring. On the one hand the electoral competition shown an almost perfect bipolar asset; on the other hand the party fragmentation was still very high. The results of these elections therefore confirmed that the new Italian party system has been consolidating following the scheme of "fragmented bipolarism". 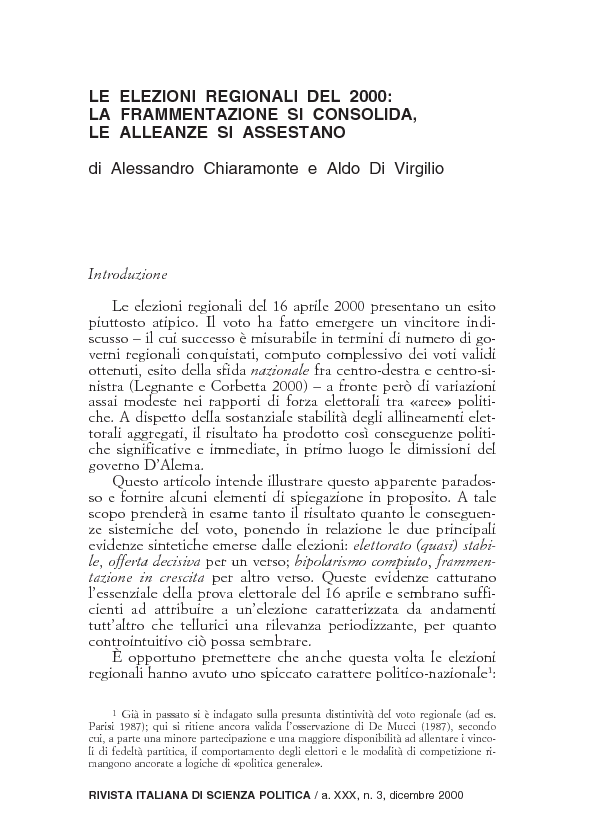