Despite what is now a genuinely voluminous literature dealing with the ramifications of the so-called "freezing hypothesis", there still remains a marked degree of confusion about what precisely was believed by Lipset and Rokkan in their classic 1967 essay to have settled into place by the 1920s. For one group of scholars, focusing on the continuing and often still dominating presence in contemporary competitive politics of many of the traditional party alternatives, much of the evidence suggests that the freezing hypothesis has continued to remain more or less valid through the decades subsequent to the Lipset-Rokkan formulation. For another, focusing on the question of whether contemporary mass politics continues to be grounded among traditional social oppositions, the weight of evidence suggests that the hypothesis is no longer valid. The real problem here, however, is that each of these sets of findings is reasonably correct, and even mutually compatible, in that both of these ostensibly contradictory conclusions rest on what is, in fact, a confused - and confusing - original assertion. This paper briefly reviews each of these approaches, and then goes on to discuss the relevance and meaning of the freezing hypothesis itself. The main suggestion is that, at least at the systemic level, and treating it as simply another way of saying that party systems become institutionalized, the hypothesis might even be taken for granted. 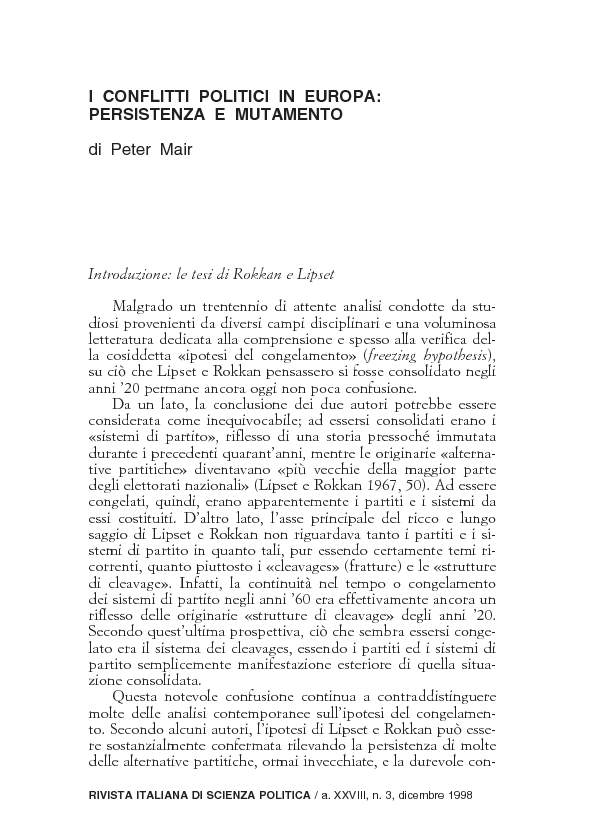