This essay is concerned with the dynamics that are marking, at the present moment, the system of Italian business interest associations after the political system's transition. As a matter of fact the whole of Italian business interest representation is hardly fragmented and, besides the bonds of different economic sectors, besides the size and the legal status of firms, the most important organisational principle has always been the political identification as, after the second world war, each association joined the catholic or communist social coalition. Both parties, Dc and Pci, have been ruling the whole of organised interests (with the exception of Confindustria) and the two social coalitions have been developing the same composition and the same framework - with antitethic ideologies - giving associations identification, peculiar values and, of course, the political management. In the long run, this political structure of social and economic regulation bred a style of policy making, founded on compromises between majority and minority and on consociativism, which produced the well known fiscal crisis of the Italian state. The current crisis of traditional parties and their ideologies, the disappearance of some of them and the transformation of others, the change of the electoral rules, the parties and associations' growing inability to control the electoral choice of citizens, the compulsory balancing of public accounts, compel the associations to rethink their role and to try to achieve greater self-government skills. However, this is very difficult as the associations lack ideologies and values of their own and are too small and weak. In the last few years, alliances, federations and small mergers among different associations have taken place at a provincial level. None of this has happened yet at a national level, where most business associations cannot face the power and the institutional legitimisation of the Confindustria (and Cgil-Cisl-Uil). 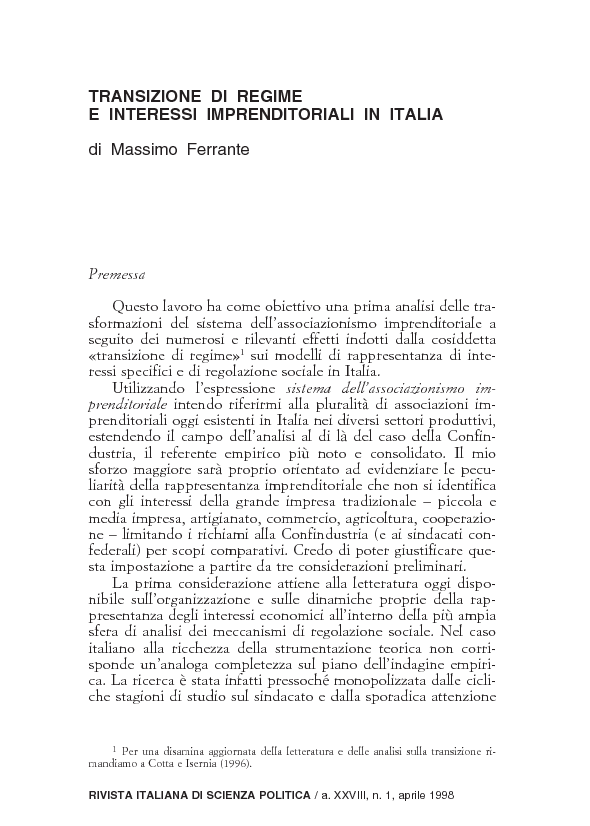