Money has always been plural and, complice the Cambrian explosion of technological solutions, is undergoing a full-fledged process of differentiation. Orthodox positions in economic theory simply do not question its neutrality, one of the key assumptions in the economic theory of money, while heterodox economics and sociology have a solid arsenal at their disposal to better cope with the reality about money revealed by the crisis, which is simply ignored. Stemming from the traditional triad of money’s functions (means of exchange, unit of account and store of value), we recall some highlights of orthodox, heterodox and sociological theories to display the rich tools available to study the most recent relevant case studies that we classify as complementary or crypto currencies along with new monetary innovations so far known as Central Bank Digital Currency (CBDC) and Corporate Digital Currency (CDC). The empirical variety testifies that money is not a neutral veil over economic processes, but it is a political and social construction serving a spectrum of purposes through specific monetary architectures. Different schemes allow for better or worse forms of money that reveal the true nature of money as a social relation between a creditor and a debtor, deep-rooted in an underlying community. Whether complementary or crypto, publicly or privately digital, the discussed new forms of money bear witness of a lively process of differentiation that reopens a long-lived debate about the future of money. 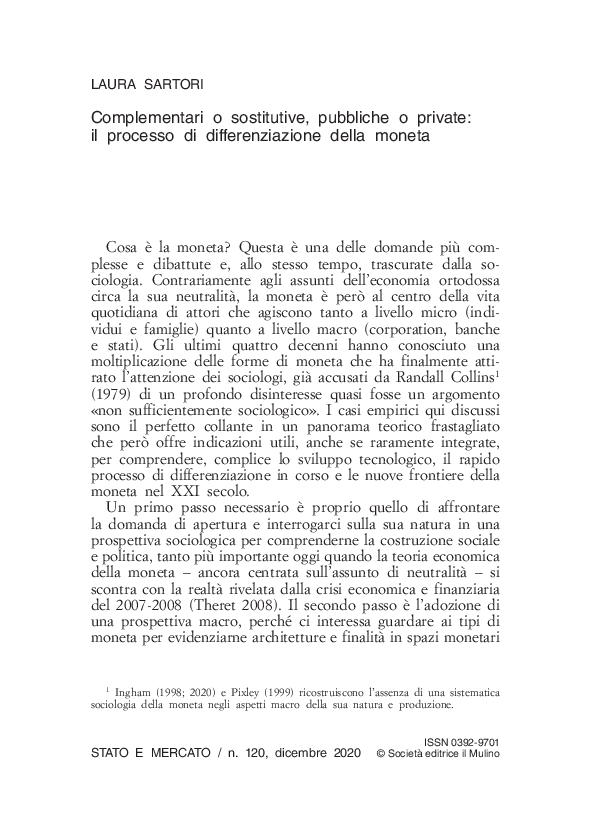