This comparative article contributes to the still open debate on the consequences of changes in households for income inequality, and proposes to distinguish the household’s role in terms of its capacity to stratify and redistribute economic resources. The empirical contribution of the article is threefold. First, it analyses the extent to which demographic and economic characteristics of households stratify income inequality levels over time in different European countries (Denmark, Germany, Italy, and the United Kingdom) and in the US. Second, it studies how institutions – market, family, and state – redistribute income and shape the stratification produced by household’s characteristics. Third, it assesses to which extent changes in the composition of households and their members’ economic behavior account for trends in inequality. Analyses are based on the subgroups decomposition of the Theil index and its counterfactuals using Luxembourg Income Study data. Results show that that household types can be considered as a relevant dimension of inequality clustering, similarly to other classical lines of stratification. The household, however, also contributes to redistribute income, as well as the state does. Institutions play a relevant role. Indeed, while changes in households are strictly associated with changes in market income inequality, their impact is limited on family income and almost absent on disposable income. 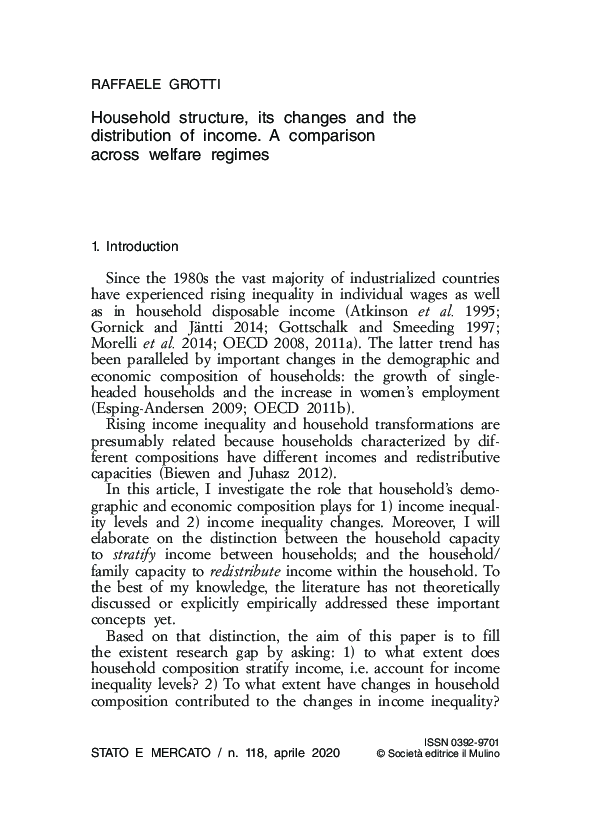