Within both the «Varieties of Capitalism» and the «European Social Model» streams of literature, very few contributions have discussed the features and prospects of Southern European (SE) economies as a specific type of capitalism. Some early works maintained that such features as the high proportion of SMEs in the production system, a wide diffusion of the hidden economy, a strong role of the family in welfare provision, a trade union division along political-ideological lines, the distinctive role of the state, characterised a type of political economy, or model of capitalism, which was typical of Southern Europe. But more recent literature has shown that Italy, Spain, Portugal and Greece started to diverge on most of these dimensions already in the mid-1990s and that they have continued to do so even during the Great Recession. One aspect that has made these SE economies look similar, however, was their inability to provide viable answers to the challenge of globalisation. The paper shows that Mediterranean countries lacked instead the institutional conditions to follow the high road of Nordic Europe or the low road of Central and Eastern Europe consistently: their political economies were too heavily regulated to successfully compete on price with Eastern Europe and with the developing economies, but, on the other hand, they were not equipped for a type of growth based on highly-skilled human capital, innovation and high social cohesion as in the Nordic model. We will show that this low capability to grow is related to a low degree of investment in R&D and highly skilled human capital, which hinders the ability to innovate and to follow a «high road» to competitiveness. 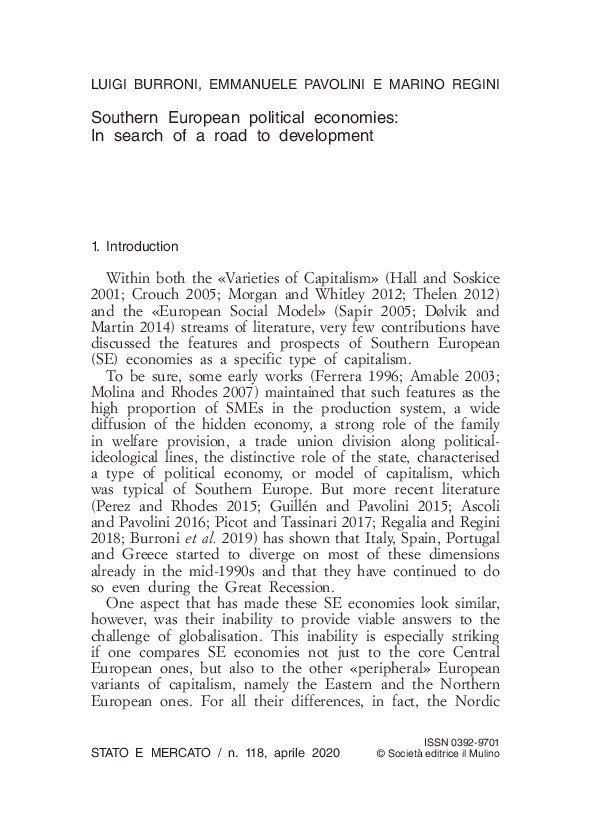