China's response to the global financial crisis was a massive stimulus program which, while effective in avoiding the sharp economic downturn experienced by other countries, accelerated the build-up of severe imbalances such as overcapacity, environmental damage, and high and rapidly increasing indebtedness. Chinese policymakers are well aware of these issues and the Third Plenum of the Party Central Committee in 2013 formulated an ambitious reform program to support the economy in the transition to a more sustainable and balanced growth path, where the market would play a «decisive» role. The reform program was further spelled out in the new Five-Year Plan 2016-2020 adopted in early 2016. However, despite significant progress in a number of areas, strong vested interests but also overly ambitious growth targets aimed at ensuring economic and social stability have slowed down reform implementation in recent years. It remains to be seen whether the 19th Congress of the Communist Party to be held in the autumn of 2017 can breathe new life into the reform process. A reinvigorated reform program may have some short-term costs in terms of economic growth and employment, but would be necessary to steer the economy away from its current path of rapid debt accumulation, which, over the medium- and long-term, risks being damaging both for financial stability and the growth potential of the Chinese economy. 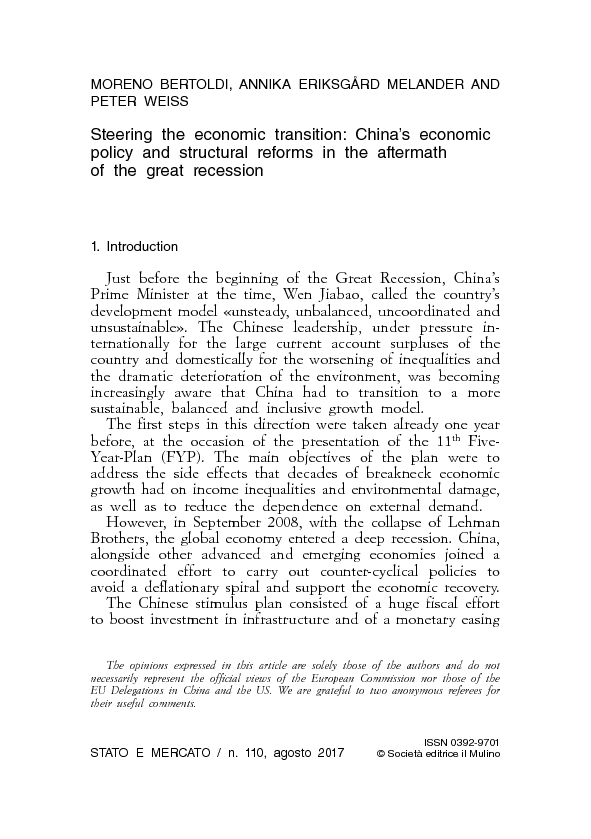