The expression «sharing economy» has spread exponentially in the past few years, a sign of the growing interest in a phenomenon that continues to maintain boundaries that are somewhat vague. The hypothesis of this paper is that this can be attributed not only to the pervasiveness and enabling power of new technologies but also to the need to fill a social vacuum due to the failures of the market and the state. The sharing economy is introducing collaborative social forms able (at least ideally) to embed economic relations within social ones. To test this hypothesis, the article uses the instrumentation implemented by Karl Polanyi to analyze the forms of integration of economy and society (exchange, reciprocity, redistribution). The political economy of the late twentieth century was especially interested in exchange (market) and redistribution (state), leaving social reciprocity in the background. However, we have to look at this more carefully to grasp any social and institutional innovation that the sharing economy can promote. The first part of this paper is devoted to an analysis of the forms of integration and, in particular, to reciprocity in its different variants. The second part, in light of the taxonomy proposed in the first, analyzes some of the most significant experiences of the sharing economy, seeking to determine the institutional characteristics and social dynamics that this could (at least potentially) engender and support. The conclusions will attempt to answer the questions formulated and indicate avenues for further research. 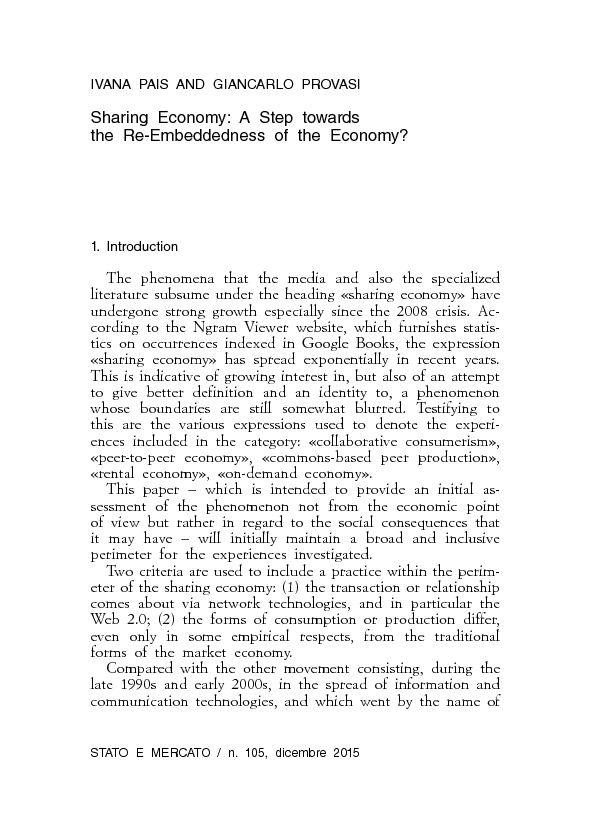