the diffusion of renewable energies is increasing also in Italy, due to incentives from the government and to the EU 2020 strategy, aimed to decrease greenhouse gases. In the last years the electricity produced by wind farms, solar panels and biomass is considerably increased in all Europe, however in some context the introduction of «green» energies has been stopped by controversies and territorial conflicts. In particular, in the Italian context the oppositions against wind farms seem to be related to aesthetic and economic reasons: on the one hand wind turbines are perceived as detrimental to the landscape; on the other hand are considered to be poorly efficient from the economic point of view. The paper tends to analyse some aspects that might influence the outputs of political decisions regarding renewable energy: role of local administrations, involvement of civil society in local policy-making and emergence of conflicts between local actors. The empirical research takes into consideration four Italian case-studies that show different ways of managing wind farms and different levels of controversies among local populations. Here it is argued that outputs in environmental and energy policies seem to be determined by combined and diversified aspects such as relationships between local institutions, civil society and citizenship, the role of conflicting actors and environmental organizations and the existence of a bottom-up approach to involving local communities. 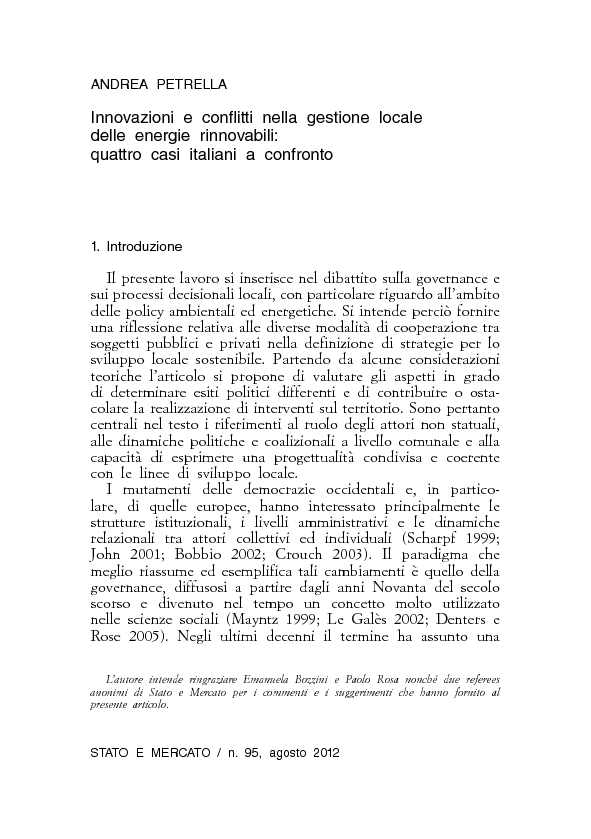