While the neo-institutional literature on democratic transition and democratic consolidation tend to answer positively to the question, the temporal link between the Third Wave of democratization and the take-off of economic globalization, associated with the increase of inequality in the Global South and the retrenchment of the welfare state in the West, cast some doubts on such conventional wisdom and raises questions on the linkage between civil-political citizenship and economic citizenship in the current world. The paper describes the social policies adopted to address inequality in postapartheid South Africa and the political debate on the mismatch between goals and outcomes after more than 15 years of democratic regime. It appears that, while racial polarization has been significantly reduced, the distributional regime introduced after democratisation has left the high levels of economic polarisation inherited from the apartheid years largely intact. It as argued that, as suggested by comparative-historical scholarship on welfare state-building in the West, the advent of economic citizenship requires the formation of particular political class-coalitions in addition to the introduction of democratic institutions. In today's world, the influence of international markets and institutions on policy options available to the political decision-makers in the peripheral and semi-peripheral areas of the world economy is so strong that the analysis of «domestic» coalition-making should be conducted across the divide between the national and the international arenas. From this perspective, it seems that conditions for the rise of a radical redistributive coalition in South Africa do not exist at the moment. 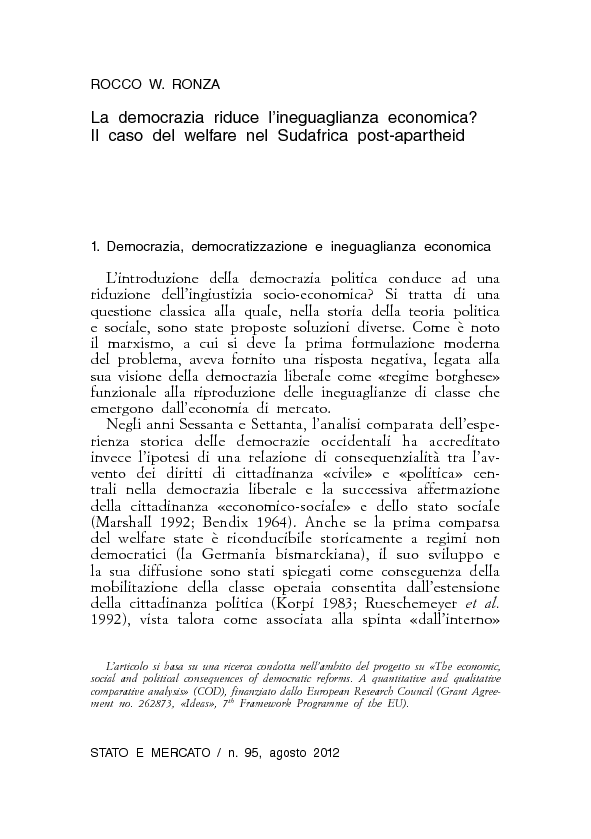