Many working on communitarian bonds among members of small groups, on inter-firm arrangements in competitive markets, on new public management in state bureaucracies and, not least, on negotiations between public and private actors in new modes of governance tend to share two core assumptions being essential to their arguments. Firstly, networks aimed at cooperation are structured horizontally while vertical networks reflect power and subordination. Secondly, horizontal networks tend to be ascribed positive properties such as, for instance, trust, the ability of providing solutions to legitimacy problems, increased efficiency and participation while vertical ones, often seen to reflect pre-modern or outdated forms of governance, are not. This contribution tries to qualify these assumptions, firstly, by looking at the structural features of networks in different systems of societal order and, secondly, by presenting and then discussing counter-intuitive empirical evidence drawn from an older research project on territorial governance in Europe. We shall see that a generalized version, at least, of the horizontalist expectation is anything but warranted and that hierarchy may be more beneficial both to those cooperating in networks and to the production of public goods than believed by many. 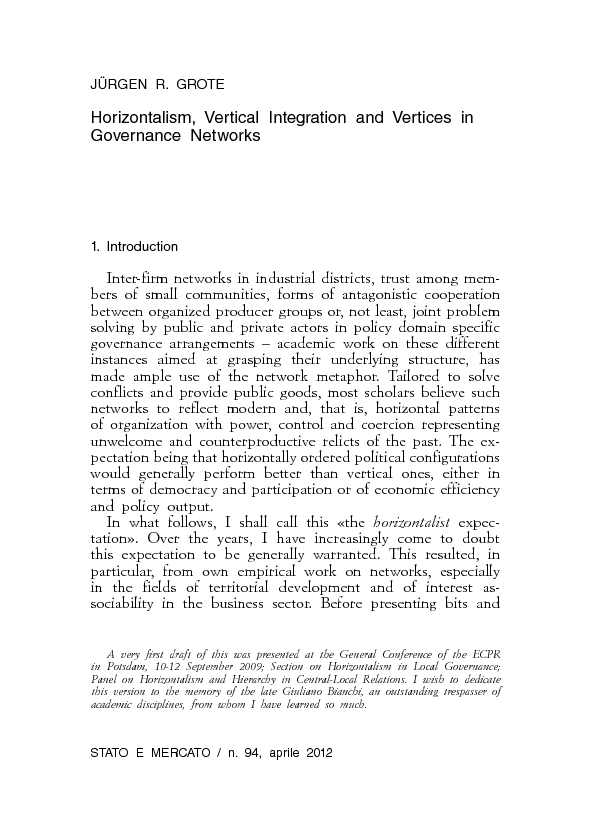