In the post-WWII period, industrial relations in advanced economies have gone through three main stages of development. During the first stage, corresponding to the rise of the Keynesian welfare state, two distinct models of regulation of labour emerged. What has been called the «institutionalization of class conflict», usually referred to as simply the European model, is based on strong industrial relations institutions such as encompassing trade unions, collective bargaining, works councils and, occasionally, tripartite concertation. On the other hand, what is often called the American model is based on a «de-radicalization of class conflict» due to extensive upward mobility and the creation of a middle class imbued with individualistic values. The historical turning point is traditionally seen in Margaret Thatcher's election in 1979, which spurred the neo-liberal wave that has characterized the second stage. In this period, the European model of regulation of labour has come under constant attack, whereas the American model has been explicitly suggested as the one towards which all advanced economies are bound to converge. This second stage lasted until the 2008 financial crisis, which has then turned into the current international economic crisis. Not much can be said yet about the longterm consequences of this crisis, in which we are fully immersed. However, as far as the regulation of labour is concerned, the key development in third stage seems to be the deepening crisis of the American model as well, for a series of factors that are discussed in this article. The conclusion is that, while the decline of European industrial relations institutions has not been halted, the American model has ceased to be a credible alternative, towards which, according to neo-liberal economists, as well as to most governments and supra-national institutions, the European model was inevitably bound to converge. 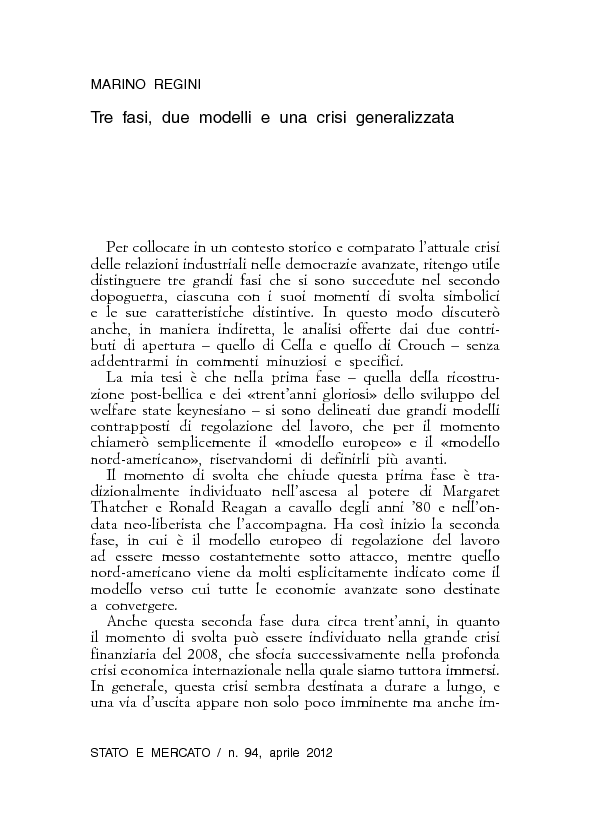