Partial and targeted labor market deregulation as undergone in Italy during the last two decades has created a strong cohort cleavage on the labor market as regards the risks of a precarious work career. In explaining the logics underlying the different kinds of labor market deregulation, the literature stresses the alternative between labor market adjustment based on wage inequality and job insecurity. Flexible and unequal labor markets in the English-speaking countries are opposed to the continental-European ones, where wage differentiation is limited but deregulation has been «at the margins». Notwithstanding the theoretical debate, there is still relatively little empirical evidence regarding the level of inequality in wages between «contingent» and «secure» work positions, especially in Italy, although, given the ongoing debate, one would expect a trade-off between job security and wage level to be operating. We use the Italian component of the 1995-2001 ECHP panel waves, the SHIW panels 2004-2006, 2006-2008 to provide an empirical based analysis of the persistence of a clear and significant wage differential between contingent and secure work in Italy that parallels and adds to the job insecurity dimension. As regard methods, we apply statistical matching, multivariate analyses and FE models. All our results confirm this specific outcome of the «deregulation at the margins» of the Italian labor market. 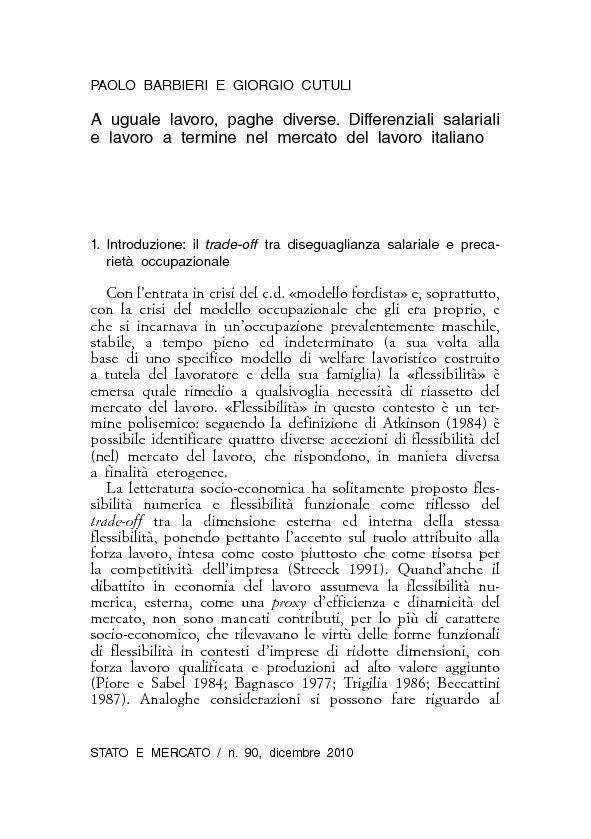